UNEP
Investing in forests is win-win for communities, climate and orangutan conservation.
21 March 2013

Governments, businesses and civil society must commit to protect forests by reducing deforestation, preventing environmental degradation, and providing sustainable livelihoods for all of those who depend on this precious ecosystem, Secretary-General Ban Ki-moon said today.

“Forests are vital for our well-being. They cover nearly a third of the globe and provide an invaluable variety of social, economic and environmental benefits,” Mr. Ban said in a message marking the first International Day of Forests.

Forests are the most biologically diverse ecosystems on land, home to more than half of the terrestrial species of animals, plants and insects. Around 1.6 billion people – including more than 2,000 indigenous cultures – depend on forests for their livelihood.

In his message, Mr. Ban highlighted the many functions that forests have in the environment and their benefits to humans. For example, they are the source of three-fourths of freshwater, stabilize slopes and prevent landslides, and protect coastal communities against tsunamis and storms. In addition, more than three million people use forest wood for fuel.

Forests also help combat climate change as they store more carbon than is in the atmosphere.

However, Mr. Ban noted that there are several threats to this ecosystem as urbanization and large-scale agriculture can exacerbate the rate of forest and biodiversity loss.

Some 13 million hectares of forest are destroyed annually, and deforestation accounts for 12 to 20 per cent of the global greenhouse gas emissions that contribute to global warming.

“As weather patterns alter due to climate change, many forested areas are increasingly vulnerable. This underlines the urgency of a global, inclusive, legally binding climate change agreement that will address greenhouse gas emissions and encourage the protection and sustainable management of forests,” Mr. Ban said.

“We need now to intensify efforts to protect forests, including by incorporating them into the post-2015 development agenda and the sustainable development goals,” he added.

The International Day of Forests comes just a little over two weeks before government ministers gather in Istanbul, Turkey, for the UN Forum on Forests. The Forum seeks to promote the management, conservation and sustainable development of all types of forests and to strengthen long-term political commitment to this end.

“The first UN International Day of Forests is a tremendous opportunity to celebrate our unique relationship to forests and trees,” said the Forum’s Director, Jan McAlpine. “This is the day for the whole world to celebrate not only the gifts that forests and trees provide us, but also the unsung heroes, those who make a difference for your forests, your trees and your communities. Find them among you and thank them.”

At a ceremony to mark the Day, the Director-General of the UN Food and Agriculture Organization (FAO), José Graziano Da Silva, called on countries to support a Zero Illegal Deforestation target and promote tree planting.

“In many countries, illegal deforestation is degrading ecosystems, diminishing water availability and limiting the supply of fuelwood – all of which reduce food security, especially for the poor,” he said. “Stopping illegal deforestation and forest degradation would do much to end hunger, extreme poverty and bring about sustainability.”

FAO also published a report today on the State of Mediterranean Forests, which are expected to be significantly affected by climate change and the pressure of population growth.

“The Mediterranean region is undergoing many changes in their societies, lifestyles and climate,” said FAO Assistant Director-General for Forests Eduardo Rojas-Briales. “If unmanaged, such changes could lead to negative impacts on livelihoods, biodiversity, wildfire risks, watersheds or desertification. There is an urgent need to regularly assess the state of Mediterranean forests using objective and reliable data and to manage endangered forest resources more sustainably.”

The report also provides recommendations for governments and foresters to adapt and mitigate the effects of climate change on forests such as frequent fires, at local, regional and national levels. 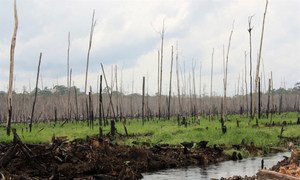 The top United Nations environment official today called on Kenya to act on a “roadmap” for reversing deforestation in the East African country, saying the document – produced following a national dialogue on the economic value of Kenya’s high-elevation forests – offers a “unique opportunity” for implementation.