7 November 2012
The top United Nations environment official today called on Kenya to act on a “roadmap” for reversing deforestation in the East African country, saying the document – produced following a national dialogue on the economic value of Kenya’s high-elevation forests – offers a “unique opportunity” for implementation.

“The outcomes of this meeting provide an agenda for moving beyond an era when forests were seen as the UN Environment Programme’s (UNEP) Executive Director, Achim Steiner, said at the conclusion of Kenya Water Towers, Forests and Green Economy National Dialogue, a three-day gathering at UNEP headquarters in the Kenyan capital, Nairobi.

The meeting focused on Kenya’s five montane forests, also known as ‘water towers’ due to the fact that these forests store water during the rainy season and release it slowly, thus ensuring water flow during dry period, according to a UNEP press release.

Kenya’s new constitution calls for an increase in forest cover to ten per cent, which, coupled with increasing public demand to halt and reverse deforestation, “has the potential to trigger unprecedented investment in the forest sector,” UNEP noted, in relaying a key point of the final outcome document of the National Dialogue.

“Kenya has already signalled its intent to build up this natural capital as a vibrant and sustainable engine for growth and prosperity,” Mr. Steiner said. “There now exists a unique opportunity to translate this pioneering and commendable intention into implementation.”

More than 200 delegates – including key decision-makers and representatives of the private sector, development partners and civil society – used the National Dialogue to map a way forward to overcome an economic deforestation deficit that a joint UNEP-Kenya Forest Service report, released on Monday, showed to be more than four times greater than gains from forestry and logging.

Deforestation deprived Kenya’s economy of 5.8 billion shillings ($68 million) in 2010 and 6.6 billion shillings in 2009, far outstripping the roughly 1.3 billion shillings injected from forestry and logging each year, UNEP cited from the report, entitled The Role and Contribution of Montane Forests and Related Ecosystem Services to the Kenyan Economy.

“Trees continued to be felled due to a multiple and complex reasons, including unregulated charcoal production, livestock grazing and human settlements,” UNEP said, adding that such activities threaten more than 70 per cent of Kenya’s water supply.

The National Dialogue, the roadmap for which covers deforestation reversal spans five years, stressed that success depended on sustained high-level political support and the involvement of the private sector and local communities, according to UNEP.

“Alongside the high-level momentum, enabling conditions for better management and private sector investment – such as secure land tenure, good forest governance and law enforcement –should be established through a clear and conducive legal framework,” UNEP said of the Dialogue’s findings

The National Dialogue roadmap recommendations include one calling for “Improved coordination and synergies,” and add that the “new constitutional limit on government departments provides an opportunity to avoid multiple policies, plans and strategies with overlapping mandates, and should be seized,” according to UNEP.

Mr. Steiner also presented Kenya’s Minister of Public Works, Dalmas Otieno, with a UNEP publication focused on Kenya’s Tana Basin, whose river is an important source of drinking water, irrigation and power, but which also has high siltation due to poor land use, and faces a deteriorating water shed.

The booklet, Securing Water and Land in the Tana Basin: a resource book for water managers and practitioner, documents field-tested practical technologies from other countries that can be replicated in Kenya to help improve management of water and land resources, UNEP said.

Separately today, the UNEP chief commented on the official launch in Singapore, on Tuesday, of a key development under the umbrella of a UNEP-backed biodiversity-appreciation programme, called the The Economics of Environment and Biodiversity (TEEB).

The opening of headquarters for the TEEB for Business Coalition marks another step in the coalition’s self-described goal of bringing about a shift in corporate behaviour so that the world’s natural capital – defined as goods and services relating to the natural environment – are preserved, rather than depleted.

“The Coalition brings together global stakeholders to study and standardize methods for natural capital accounting to enable its valuation and reporting in business,” explained a UNEP press release.

It also cited Mr. Steiner as saying that TEEB’s work “makes another sound case for an inclusive Green Economy in the context of sustainable development and poverty eradication, and highlights an urgent need to integrate the valuation of natural capital into business practices in the vital private sector.” 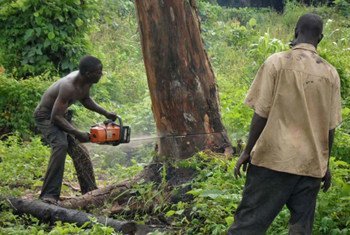 5 November 2012
A landmark study of Kenya’s high-elevation forests shows that the economic cost of deforestation in the East African country exceeds national gains from forestry and logging by more than four-to-one, the United Nations Environment Programme (UNEP) said today.