UNMAS
Vehicle-mounted mine detection system used by the UN Mine Action Service (UNMAS) to verify roads are clear of landmines.

19 March 2013
The United Nations Mine Action Service (UNMAS) is expanding its operations in Afghanistan, the Democratic Republic of the Congo (DRC), Libya, Somalia and South Sudan, thanks to a multi-million dollar contribution from the Government of Japan.

The $18 million contribution “will save lives, increase stability and most importantly bring hope to populations that have lived with fear for too many years,” the Chief of UNMAS Operations, Paul Heslop, said in a press release.

The UN agency will divide the funds among its programmes in five countries. In Afghanistan, the funding will support the work of some 13,000 deminers. Afghanistan remains one of the most heavily mined countries in the world with 80 per cent of landmines and explosive remnants of war (ERW) on agricultural land. During the last two years, an average of 42 civilians per month, the majority of them boys under the age of 18, died or were injured in accidents involving mines and ERW.

The funding will also be used to survey and secure huge swaths of territory in DRC and to provide risk education to people exposed to explosive hazards. ERWs have heavily contaminated parts of the country, especially in 8 out of the 11 provinces, according to UNMAS. This contamination – suspected or confirmed – represents a daily risk for the population.

In Libya, the funding will provide support for operations and training for explosive ordnance disposal and clearance.

“The 2011 conflict in Libya exacerbated the explosive remnants of war threat to local communities,” explained Diek Engelbrecht, the Head of the UNMAS Programme in Libya.

“Thanks to the generous support of the Government of Japan, the UN Mine Action Service will be able to continue facilitating clearance operations for a safer Libya,” he added.

In Somalia, the first mine laying occurred during the 1964 and 1977 Ogaden wars, when minefields were established along the Ethiopian border. More recently, inter-clan fighting widely used mines during the break up of Somalia in 1991. The funding will be used to support operations and for training.

In South Sudan, the funding will allow ongoing work, surveying and securing at risk areas to continue and will expedite clearance of the most contaminated areas. All 10 states of South Sudan are contaminated to varying degrees with landmines and other ERWs, according to UNMAS, laid during the country’s two civil wars covering a 50-year period. 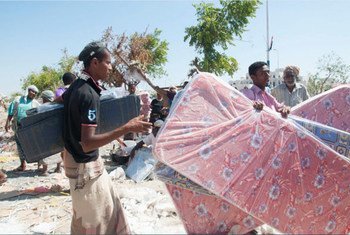 5 March 2013
Landmines and other explosive remnants of war are threatening the safe return of internally displaced persons (IDPs) in Yemen, a spokesperson for the United Nations humanitarian arm warned today, adding that demining efforts are being hampered by a funding shortfall.