Mrs. Robinson, who served as president from 1990 to 1997, has more than four decades of political and diplomatic experience, including as United Nations High Commissioner for Human Rights from 1997 to 2002.

She will “play a key role in supporting the implementation of the Peace, Security and Cooperation Framework for the Democratic Republic of the Congo (DRC) and the Great Lakes region of Africa,” said the announcement.

“I am honoured that the Secretary-General has entrusted to me this important responsibility, to which I am already focusing my energies,” Mrs. Robinson said in a statement.

“The latest developments in the eastern DRC, where recent fighting between two factions of the M23 led to several hundred people, including combatants, crossing into Rwanda, underscores the importance of the Peace, Security and Cooperation Framework as an instrument to address the root causes of instability in the Great Lakes region.”

Mrs. Robinson said she would travel to the Great Lakes region in the coming weeks and planned to work closely with the leaders there to ensure that the presence of combatants in their territories is addressed by their respective governments.

Internationally renowned for championing human rights, Mrs. Robinson is also a member of the so-called “Elders” and serves on the Board and Prize Committee of the Mo Ibrahim Foundation.

According to the announcement, she will continue to serve as President of the Mary Robinson Foundation – Climate Justice, which advocates for victims of climate change who are usually forgotten – the poor, the disempowered and the marginalized across the world. 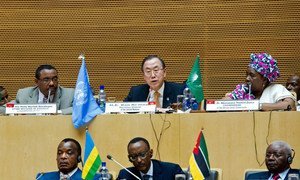