Renewed rebel attacks in the Central African Republic (CAR) have isolated much of the population of the impoverished country, multiplying suffering and requiring increased attention by the international community, a United Nations envoy says.

“There is a feeling of helplessness,” Margaret Vogt, the Special Representative of the Secretary-General told reporters in New York yesterday. “Without a strong response from the international community there is no future,” she said.

She cited reports of widespread rape, looting, recruitment of children and risk of starvation as residents of villages hide in the bush out of fear of the violence and neglect to sow their crops.

The CAR has a history of political instability and recurring armed conflict, which flared again in December 2013 when an alliance of rebel groups known collectively as ‘Séléka’ launched a series of attacks.

The fighters took control of major towns and were advancing on the capital, Bangui, before agreeing to start peace talks under the auspices of the regional group known as the Economic Community of Central African States (ECCAS).

A peace agreement was reached on 11 January, resulting in a ceasefire agreement and a shared governance arrangement in which opposition figures were given key posts, but the rebels claim the Government is failing to live up to its commitments, Ms. Vogt said.

In the latest attacks, she said, the Séléka rebels have overrun a wide swathe of the country’s territory, and on Tuesday took the major town of Bangassou, the gateway to the south-east of the country and critical refuelling stop for humanitarian workers.

The rebels were not engaged in making arrangements for humanitarian access, Ms. Vogt said, while atrocities were taking place. “At the best of times, the humanitarian situation is not good, but now the population is completely cut-off,” she added.

She said it was critical to strengthen the capacity of the region to enforce agreements. In addition, the UN Integrated Peacebuilding Office (BINUCA) was trying to assist mediators to get the parties back to the table. The African Union is engaged as well, she said, adding “We should all be more engaged.”

Her strongest feelings concerned the civilian victims and their abusers, however, expressing anger over women being raped and children deprived of education. “Angry that people who… used to live decent lives – poor yes, but at least they have their lives – have to run into the bush just to escape these atrocities. It is not fair,” she told UN radio in a separate interview.

BINUCA’s work to facilitate the implementation of the agreements is part of its mandate to help consolidate peace in the long-troubled nation, including support for security reform and reintegration of ex-combatants. 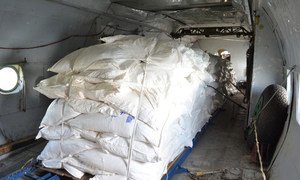 An assessment conducted by the United Nations and its partners has found that the recent conflict in the Central African Republic (CAR) could trigger a food crisis in the country, the world body said today.