OCHA/L. Paletta
Food drop over Sikikédé, Central African Republic, in response to the food and nutrition crisis in the western Vakaga region in September 2012.

15 February 2013
An assessment conducted by the United Nations and its partners has found that the recent conflict in the Central African Republic (CAR) could trigger a food crisis in the country, the world body said today.

An assessment conducted by the United Nations and its partners has found that the recent conflict in the Central African Republic (CAR) could trigger a food crisis in the country, the world body said today.

“We are very concerned about prospects for the 2013 growing season, which is due to start in just a few weeks,” said the Food and Agriculture Organization (FAO) Representative in Bangui, Rockaya Fall. “Land preparation, which should have begun, is behind schedule in many places, due to insecurity.”

The CAR has a history of political instability and recurring armed conflict. The country saw renewed fighting in December, when an alliance of rebel groups – known, collectively, as ‘Séléka’ – launched a series of attacks and took control of major towns before agreeing to start peace talks under the auspices of the regional group known as the Economic Community of Central African States (ECCAS).

According to the assessment, trade has been interrupted between the area held by the Séléka coalition and the rest of the country, bringing transactions to a halt and leading to sharp increases in food prices.

The cost of a food basket has increased by 40 per cent in the area under the control of the Central African armed forces, while zones under the control of the Séléka, where some 800,000 live, are experiencing food deficits. Looting has become widespread, and is affecting food and seed stocks as well as animals and livestock. The resulting insecurity is also limiting farmers from working their fields.

The World Food Programme (WFP) warned that food deficits will be highest during the lean season from May to September. Added to that, as food prices increase, the population’s resources will further dwindle. Whereas a Central African labourer could purchase as much as six kilogrammes of cassava with a day’s wages a year ago, he or she can only purchase three kilogrammes this year, due to lower wage rates and higher prices.

“Although the situation in the field has yet to reach crisis proportions, there is risk that it might during the approaching lean season,” said WFP Representative in the CAR, Housainou Taal. “Humanitarian access to the Séléka zone must be ensured to avoid a crisis.” 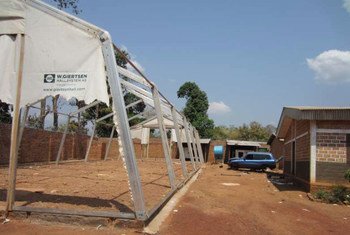 12 February 2013
The United Nations refugee agency today voicedconcern over widespread looting and displacement in various parts of the Central African Republic (CAR), and appealed to the Government to enhance access to vulnerable population so they can receive assistance.