5 March 2013
The independent United Nations body tasked with monitoring the production and consumption of narcotics worldwide today warned of the increase in use of psychoactive substances known as 'legal highs' which reproduce the effect of illegal drugs, and represent a threat to public health.

“In recent years, there has been an unprecedented surge in the abuse of new psychoactive substances,” said the President of the Vienna-based International Narcotics Control Board (INCB), Raymond Yans.

According to the latest INCB annual report, these 'legal highs' are easily available over the Internet, with their numbers estimated to be in the hundreds and growing steadily.

“In Europe alone, almost one new substance is appearing every week,” Mr. Yans said. “Previously, between 2000 and 2005 there was an average of five notifications of new substances per year. Clear action must be taken now by governments to prevent and deal with the abuse of these so-called 'legal highs' which are already a threat to public health and pose a significant challenge to public health systems.”

The report also states that the abuse of prescription drugs has continued to spread in all regions of the world. In particular, there has been an unabated increase in the consumption of drugs used for the treatment of attention deficit hyperactivity disorder (ADHD) in a number of countries.

Another major issue is the abuse of tranquilizers and sedatives. “More than 6 per cent of secondary school students have already abused tranquilizers in some countries, highlighting another alarming trend of drug abuse,” Mr. Yans said.

He added that the drug problem is “a truly global problem that necessitates a global solution” at an international, national and community level, and stressed the importance of following existing international drug control conventions to prevent drug-related trafficking.

The report also outlines the situation in each geographical region, noting that North America remains the biggest illicit drug market in the world, as well as the region reporting the highest drug-related mortality rate with approximately one in every 20 deaths among people aged from 15 to 64 in North America related to drug abuse.

Cannabis remains the most widely cultivated, trafficked and abused drug in Africa, the report says, but amphetamine-type stimulants are increasingly seen as a new threat in the region. There have also been higher levels of cocaine abuse in West Africa, as the region has emerged as a transit area for narcotics from South America to the European market in recent years.

In South America, the total area of illicit coca bush cultivation has slightly decreased compared to the previous years. However, there continue to be large seizures of cannabis. Central America and the Caribbean continue to be used as major transit areas for cocaine trafficked from South America to the North American market, which is having destabilizing effects in these countries due to an increase in the levels of drug-related violence. This continues to constitute a major threat to public security particularly in Mexico, where – according to Government figures – more than 60,000 people have been killed as a result of drug-related violence since 2006.

East and South-East Asia continue to have the second largest total area of illicit opium poppy cultivation in the world, and the region is also a manufacturing hub for amphetamine-type stimulants with almost half the global seizures of methamphetamine in 2010 made in South-East Asia. Meanwhile, the levels of abuse and illicit manufacture of amphetamine-type stimulants in Oceania remain among the highest in the world.

For its part, West Asia still has the greatest share of global illicit opium poppy cultivation and illicit opiate production, primarily in Afghanistan. 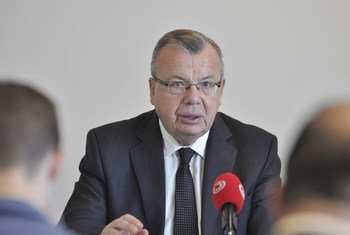 18 December 2012
While noting the many challenges related to the flow of opiates from Afghanistan, the United Nations crime chief today praised the joint achievements of that country and two of its neighbours for their efforts to halt this movement.