NASA/JPL-Caltech
This full view of the giant asteroid Vesta was taken by NASA’s Dawn spacecraft.

20 February 2013
In the wake of a meteor impact in Russia that shattered windows over a wide area, injuring hundreds of people and terrifying thousands, a United Nations team today called for international cooperation to face the threat of near space objects.

“If the proposed coordination mechanism was in place, then at minimum it would have allowed for more observation and better understanding and education of the population on what to expect rather than having a surprise effect with people not knowing what was happening,” Sergio Camacho, Chairman of the Action Team on Near-Earth Objects of the UN Office for Outer Space Affairs (UNOOSA), said at a press conference in Vienna.

Mr. Camacho’s team, also known as Action Team 14, recommended the formation of an International Asteroid Warning Network (IAWN), which would pool together the expertise of the world’s many existing scientific agencies and organizations to discover and track objects and generate early warnings of potential impacts.

It also recommended forming advisory groups for disaster mitigation and for combining the technological resources of all space-faring nations to develop protocols that may include collision-prevention missions.

The group emphasized the value of finding hazardous near-earth objects, or NEOs, as soon as possible in order to better understand their orbits. This would help to avoid unnecessary NEO “threat mitigation missions” should it be deemed necessary, it said.

Near-Earth objects made headlines last Friday, with not only the meteor impact in the Russian region of Chelyabinsk, but also given the fly-by – on the same day – of an asteroid, widely described as being the size of an office building, that passed within 17,200 miles (27,000 kilometres) of Earth.

However, UNOOSA has long been preoccupied with the issue, given the potential devastation of an object that size hitting the Earth and the enormous resources required to prevent a collision if the need arises.

“Already in 1995, UNOOSA organized the United Nations International Conference on Near-Earth Objects in New York to sensitize Member States about the potential threat of near-Earth objects, given the global consequences of their impact,” Mazlan Othman, Director of UNOOSA, said at today’s press conference.

The team has been mandated to review ongoing efforts in the field of NEOs, identify gaps that could be filled by coordination and propose steps for such coordination in collaboration with specialized bodies.

The team is currently discussing their recommendations in the framework of the Scientific and Technical Subcommittee of the Committee on the Peaceful Uses of Outer Space. The recommendations are expected to be adopted during the Subcommittee’s current session, which ends Friday, and then endorsed by the Committee itself during its session in June.

According to the team, an agreement by that date should still prove valuable. “No object larger than a kilometre is expected to pose a threat to Earth in the next few hundred years,” according to one of today’s briefers, Lindley Johnson, Executive of the Near Earth Object Observation Program of the United States National Aeronautics and Space Administration (NASA). 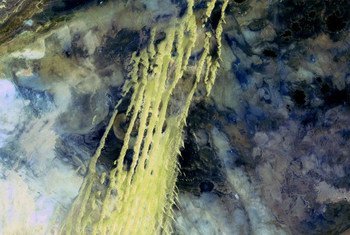 4 October 2012
The United Nations launched into World Space Week today, with the presentation of a navigation satellite model, donated by Russia, for display at the world body’s offices in Vienna, while also highlighting the contribution space science and technology has made to human development.