19 February 2013
The United Nations political office for Somalia today condemned a series of February terror attacks, urging Somalis to strengthen their resolve against terrorism and work with the authorities to bring the perpetrators to justice.

“We will not let these cowardly acts unravel the remarkable progress of the past ten months,” the Special Representative of the United Nations Secretary-General for Somalia, Augustine Mahiga, said through a statement released today by the UN Political Office for Somalia (UNPOS).

UNPOS, the statement states, “condemns the terror attacks that have occurred in Somalia during the first half of February” including the killing of a popular Islamic scholar and a bombing of a Mogadishu beach.

Through the statement, Mr. Mahiga offered his extends his heartfelt condolences to the bereaved families and wished the injured a quick recovery.

The high-profile attacks include the assassination of a leading Somali Islamic scholar, Sheikh Abdiqadir “Ga’amey” Nur Farah, in Garowe. Mr. Nun Farah was reported killed while praying in a mosque.

His killing follows a suicide attack in the central town of Galkayo targeting top police officials in the Somali state of Puntland.

During the same period there have been terror attacks in other regions of South Central Somalia, including a car bomb attack at Mogadishu’s Lido beach restaurant on 16 February, and the killing of a Shibis District intelligence chief in the capital’s Nasib Buundo neighbourhood.

In today’s statement, Mr. Mahiga calls on Somalis “to strengthen their resolve to resist terrorism by working with the authorities to bring the perpetrators of these heinous crimes to justice.”

He also reiterated that UNPOS is committed to supporting security in Somali through its Government.

Somalia marked a historic political watershed last August when it swore-in the first formal parliament and ended a so-called “transition” phase which had begun with the 2004 launch of a UN-backed interim government. The previous functioning government ended in 1991 with the overthrow of dictator Mohamed Siad Barre.

The improvements in security and political situations are allowing the UNPOS to relocate more of its operations to Mogadishu over the next six to 12 months, the Assistant Secretary-General for Political Affairs, Tayé-Brook Zerihoun, told the Security Council last week. 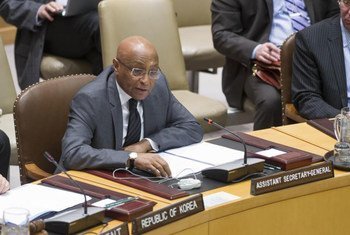