13 February 2013
The head of the Economic and Social Council (ECOSOC) today called for greater coordination between the United Nations and the Bretton Woods institutions to reduce inequalities, as he laid out priorities for the body tasked with confronting the world’s economic, social and environmental challenges.

Ambassador Néstor Osorio of Colombia said he is planning to meet soon with representatives of the World Bank and the International Monetary Fund (IMF), as well as the World Trade Organization (WTO) and the UN Conference on Trade and Development (UNCTAD) to discuss economic development, poverty reduction, trade and job creation.

Speaking at his first press conference since taking up the post on 28 January, Mr. Osorio told journalists at UN Headquarters that dialogue about macroeconomics with these institutions is vital “in light of the difficult world economic situation that we are living [in] and the need to really be clear about possibilities.”

He added that given high unemployment rates and other economic challenges that financially stable Member States face, particularly the United States and those in Europe, “the collateral casualties of that situation are the developing countries and the programmes to help developing countries make progress.”

Official development assistance (ODA) stands at 0.31 per cent of national income of developed countries. The UN recommended target is 0.7 per cent, according to ECOSOC figures.

ECOSOC will focus its annual ministerial review in July in Geneva on the intersection of science, technology and innovation in promoting sustainable development and achieving the anti-poverty targets known as the Millennium Development Goals (MDGs), Mr. Osorio said.

The theme is meant to be an opportunity to follow up on the UN Conference on Sustainable Development (Rio+20). Hosted in Rio de Janeiro, Brazil, in June of last year, the conference was a follow-up to the 1992 UN Conference on Environment and Development which was meant to reconcile economic and environmental goals of the international community.

In Rio, participating Member States decided to develop a set of Sustainable Development Goals which will build on the MDGs and be part of the post-2015 development agenda which is included in ECOSOC’s agenda.

Among ECOSOC’s plans for the year is to develop activities to prepare youth for jobs in science, education and technology, and to work on “the necessary recommendations to governments and the private sector” in order to prepare the labour force for innovations in this field, Mr. Osorio noted.

Also on the agenda is food security and nutrition, as well limited arable land and limited resources of water.

Asked if he planned to dissolve any of the ECOSCO subsidiary bodies, which include regional commissions, standing committees and groups of experts, Mr. Osorio said that members of the bureau have been reviewing all the bodies. “There are 60 years of accumulation of mandates. We have to see which ones are still relevant and to what degree.” 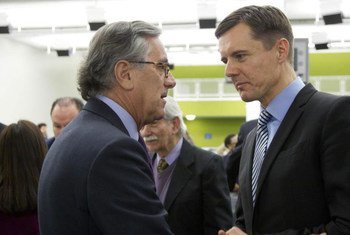 28 January 2013
Ambassador Néstor Osorio of Colombia was elected today to serve as President of the Economic and Social Council (ECOSOC), marking the annual handover of leadership for one of the six principal organs of the United Nations and the main body tasked with confronting the world’s economic, social and environmental challenges.