FAO/J. Spanner
A woman is seen here food shopping at the market.
7 February 2013

FAO’s Food Price Index – which measures monthly changes in international prices of a basket of meat, dairy, cereals, oils and fats, and sugar – remained at 210 points in January, same as in December.

The plateau coincides with a revised 2012 forecast for world cereal production estimated at 2,302 million tonnes, up 20 million tonnes from December’s forecast, but two per cent down from the 2011 record crop, the agency said in a news release.

According to the ‘Cereals Supply and Demand Brief’ put out by the agency, the revision is linked to adjustments in maize production estimates in China, North America and the European Commonwealth of Independent States.

Early prospects for 2013 cereal production expect increased world wheat output, largely from a 4 to 5 per cent bump in wheat production within the European Union, where the weather has been favourable so far.

Meanwhile, in the United States, wheat production in the southern Plains is expected to wither due to severe drought conditions.

The FAO Cereal Price Index dropped 1.1 per cent, or nearly three points, to 247 points in January. The Cereal Index has been on the decline since October, reflecting improved crop conditions.

Prices for oils and fats rose 4.4 per cent, or 9 points, from December, reversing declines in the last four months to an average of 205 in January. The rebound was mainly driven by palm oil on account of fresh import demand.

Sugar prices are falling due to a surplus, notably in Brazil and Thailand. The FAO Sugar Price Index averaged 268 in January, down 2.2 per cent, or 6 points, from December. 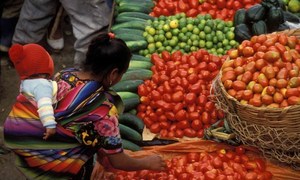 The United Nations today reported that food prices fell for the third month in a row in December last year, balancing out sharp increases registered earlier in 2012, which had previously sparked fears of a food crisis.