5 February 2013
Secretary-General Ban Ki-moon today urged the swift resumption of negotiations toward a two-State solution to the Middle East conflict, citing Israeli settlements and delays in Palestinian reconciliation among obstacles to be overcome.

“The status quo is unsustainable, and unacceptable,” Mr. Ban told the General Assembly’s Committee on the Exercise of the Inalienable Rights of the Palestinian People, as it opened its 2013 session.

He added that both parties must live up to their commitment to a negotiated two-State solution consistent with Security Council resolutions 242 and 338 and resolve all core issues, namely territory, security, Jerusalem, refugees, settlements, and water.

“We cannot afford a year without tangible results,” he stressed. Among recent events that further underlined the need to act, he noted the November 2012 General Assembly vote according Palestine the status of non-member observer State at the UN.

“This moment resonated deeply within the United Nations and underscored the urgency for achieving a two-State solution,” he said, affirming, “There is no substitute for negotiations to this end.”

Recalling the Israeli elections held on 22 January, Mr. Ban said: “We look forward to engaging the next Israeli Government in the common pursuit of peace. This is no time to be idle.”

At the same time, he said he is “dismayed by the dramatic increase” in Israeli settlement activity, calling it illegal and a major obstacle to a two-State solution. Relieved by a recent Israeli decision to transfer tax and customs revenues to the Palestinian Authority, he urged timely and predictable transfers and increased donor support.

Despite some recent relaxations of restrictions in Gaza, he said that more also needed to be done to lift the closure and improve the humanitarian situation while addressing Israel’s legitimate security concerns.

He added that the fragile ceasefire in Gaza provided an opportunity to address underlying contributors to instability in the area, as well as advance efforts toward Palestinian reconciliation, which he called another essential step for durable peace.

“The peace process and reconciliation are not incompatible; efforts must be made on both fronts,” he stated, adding “Hamas must make clear where it stands on the central issues at stake.” 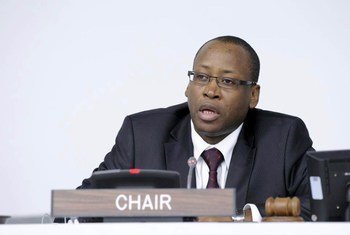 4 April 2012
The head of a United Nations committee on Palestinian rights said today that it had heard the indignation of the world concerning the treatment of Palestinian prisoners in Israeli prisons and detention centres.