29 January 2013
The United Nations Children’s Fund (UNICEF) is scaling up operations in the Central African Republic (CAR) to help thousands of children who have been affected by the recent violence in the country and in urgent need of assistance.

“From what we have seen in some of the hardest hit areas, including N’dele, Bria, Bombari, and Kaga Bandoro, children are living in extremely precarious conditions,” said the UNICEF Representative for the CAR, Souleymane Diabaté.

“It is critical we reach them now with immediate assistance, but we urge all parties involved to make long-term welfare an urgent priority and a critical part of any political settlement,” he stated in a news release.

The CAR has a history of political instability and recurring armed conflict. State authority is weak in many parts of the country. Most recently, the country has been dealing with the impact of an alliance of rebel groups – known collectively as ‘Séléka’ – which had been advancing on the capital, Bangui, but agreed to start peace talks under the auspices of the regional group known as the Economic Community of Central African States (ECCAS).

According to UNICEF, the recent conflict has affected nearly 1.8 million people and left 800,000 in urgent need of humanitarian assistance.

The agency said its priority would be to reach communities that have been inaccessible and lacked food, medicine, water, sanitation, hygiene, education and protection. It currently assists 45,000 people.

To scale up the immediate response, some 17 tons of supplies, including medicine, water purification tablets, therapeutic food, cooking sets, tarpaulins, mosquito nets and other essential household items, have arrived to the country by air, and another 52 tons will arrive by road this week.

Even before the recent outbreak of fighting, CAR was one of the poorest countries in the world. It has the ninth highest rate of child mortality with 8 per cent of children between six months and five years of age suffering from moderate acute malnutrition and 1.9 per cent with severe acute malnutrition.

In conflict-affected areas, only 48 per cent of children, and only 42 per cent of girls, are enrolled in school. There have also been recent reports of child recruitment by armed groups that had previously made commitments to stop this practice.

“We urge all actors to unite to work for the benefit of their people, especially children,” said Mr. Diabaté.

UNICEF will be working with Government ministries and other partners to prevent and respond to children at risk of trafficking and armed recruitment, prevent child mortality through medical support, improve access to water and sanitation, provide support to displaced families, and ensure children regain access to education in safe schools. 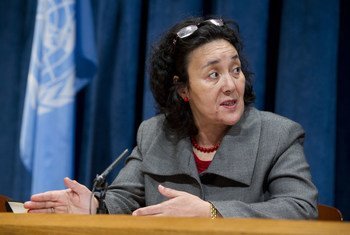 21 January 2013
A top United Nations official today expressed disappointment after new reports of child recruitment by armed groups in the Central African Republic (CAR) that had previously made commitments to stop this practice.