Reaffirming its commitment to Haiti as the United Nations seeks to complete its peacekeeping mission in the crisis-beset country, the Security Council has urged all political actors to work constructively on priorities, including credible 2013 elections and security sector reform.

“The members of the Security Council urge all political actors in Haiti to redouble their efforts to preserve the stability and progress achieved over the past year,” the 15-member body said through a statement issued to the press last night by Ambassador Masood Khan of Pakistan, which holds the January presidency.

Noting a recent briefing received from Mariano Fernandez, Special Representative for the Secretary-General and head of the UN Stabilization Mission in Haiti (MINUSTAH), the Council emphasized strengthening the rule of law and the security sector to consolidate stability “as the United Nations works toward a sustainable and responsible future end to the peacekeeping mission in Haiti.”

In that context, it said, the development of a consolidation plan for MINUSTAH, based on developing conditions, is expected.

The Council recognized progress achieved in the security field with the critical support of the mission and reiterated the need for security to be accompanied by social and economic development.

To both nurture stability and create an environment for development, Council members “underscore in particular the importance of holding free, fair, inclusive and credible elections by the end of 2013,” affirming that MINUSTAH stands ready to provide logistical and security support.

Mr. Fernandez recently welcomed work begun by Haiti’s President and the President of the National Assembly to organize local, municipal and mid-term legislative elections, which have been delayed for over a year, by the end of this year.

The Council established MINUSTAH in June 2004 to restore a secure and stable environment, to promote the political process, to strengthen Haiti’s Government institutions and rule-of-law-structures, as well as to promote and to protect human rights. 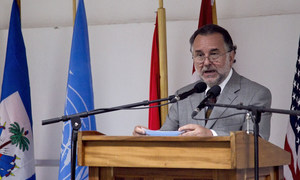 Haiti: top UN official calls for delayed elections to be held within the year

The top United Nations official in Haiti today called on the Government of the beleaguered Caribbean country to carry out free and fair elections, which have been delayed for over a year, as soon as possible within 2013.