25 January 2013
Secretary-General Ban Ki-moon today called on participants at the World Economic Forum in Davos, Switzerland, to strengthen efforts to achieve global targets related to education and health, stressing the imperative of building a better future for all.

“Education must be a top priority of the global political and development agendas,” Mr. Ban said in remarks prepared for a session on the Global Education Imperative, adding that “this is not an option, but an imperative.”

Joined at the session by his Special Envoy for Global Education, Gordon Brown, the Secretary-General noted that progress in this critical field has stalled in recent years. This led him to launch Education First last September, securing $1.5 billion in commitments to increase access to, and the quality of, education for children worldwide.

“Education empowers people and transforms lives,” stated Mr. Ban. “None of us here could ever imagine what our lives and those of our children would be without education. Education gives people hope, confidence and dignity. It equips them with knowledge and skills to escape poverty. It saves lives and reduces the spread of preventable diseases.”

“With unemployment rising so dramatically, we need, more than ever, to invest in relevant education. Many jobseekers do not have the skills that new jobs need. We can not afford a ‘lost generation.’”

Education is also the foundation for a more peaceful and sustainable future, he added. “By influencing people’s attitudes and behaviours, education is a key channel for better mutual understanding, tolerance and respect for each other and our planet.”

The Secretary-General also highlighted the need to do more on health-related targets, in remarks prepared for a reception on Every Woman Every Child, the initiative he launched with the goal of saving 16 million lives by 2015.

“We must recognize where we can do more and how we can continue to make progress, not only on the health-related Millennium Development Goals but on all of the interconnected development challenges,” he stated.

Deputy Secretary-General Jan Eliasson, who is currently on an official visit to Chile, also highlighted the need to do more to help women who give birth. “We are not making the kind of progress on maternal health that we would like to see,” he told a press conference in the capital, Santiago.

Mr. Ban pointed to Every Woman Every Child as a “shining example” of successful multi-stakeholder partnership in action whose achievements can be replicated in areas such as food and nutrition and climate change.

“I will soon be presenting to Member States a proposal for a new Partnership Facility to help realize the full potential of transformative partnerships across United Nations activities,” said Mr. Ban, who highlighted a range of new partners that have joined the effort to radically improve the health of women and children, including advancing the control of deadly diseases such as HIV/AIDS, tuberculosis and malaria.

In many countries, he noted, different sectors and industries have pooled resources and expertise to create ingenious sustainable solutions to the most pressing local challenges, from preventing the transmission of HIV/AIDS from mother to child to ensuring clean water and sanitation and preventing diarrhoea.

“Working together, these partners are reducing the cost of much-needed treatments and life-saving medical products, and increasing the accessibility of essential healthcare and medicines,” the Secretary-General stated.

While in Davos, Mr. Ban held a number of bilateral meetings, including with the Prime Minister of Lebanon, Najib Mikati, and several members of the United States House of Representatives, discussing the situation in Syria, among other issues.

UNICEF seeks nearly $1.4 billion to assist children in crisis in 2013 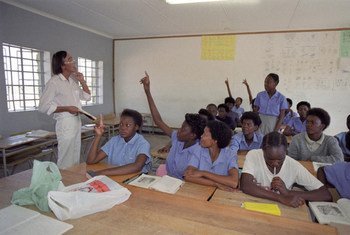