“Every one of us stands on the shoulders of our teachers, our communities, our families who believed in us and invested in our education,” Mr. Ban said at the launch of the Education First initiative, at the margins of the 67th session of the General Assembly in New York. “We are here today because we know every child everywhere deserves that same chance.”

Countries, private companies and foundations mobilized resources for the initiative, which will focus on three priorities over the next five years. These priorities are: putting every child in school, improving the quality of learning and fostering global citizenship through education.

“Education First seeks to answer the call of parents everywhere for the schooling their children deserve – from the earliest years to adulthood,” Mr. Ban said.

At the end of the 1990s, 108 million children of primary school age were not enrolled in schools. That number has fallen to 61 million today, according to the UN Educational, Scientific and Cultural Organization’s (UNESCO) global monitoring report.

While there has been significant progress, Mr. Ban stressed there is still much left to do to help achieve universal primary education – one of the anti-poverty targets known as the Millennium Development Goals (MDGs) – before the target date of 2015.

“We must spare no effort to achieve the MDGs by 2015. We have three years and three months. We must intensify our work. This is our collective responsibility.”

Mr. Ban also emphasized that the initiative will encourage transformative education that will give children the necessary tools and skills for today’s job market, bridging the gap between skills and technological power, while at the same time helping young people “forge more just, peaceful and tolerant societies.”

Among the countries that pledged to intensify their support for Education First are Australia, Bangladesh, South Africa, Timor-Leste and Denmark. From the private sector, the Western Union Foundation and the Master Card Foundation pledged to give grants for economically disadvantaged students from the African continent so they can complete their education.

The launch, which was attended by Mr. Ban’s Special Envoy for Global Education, Gordon Brown, UN officials, chief executive officers of major corporations and representatives from civil society, was followed by a discussion of the initiative’s goals. Among the panellists are Queen Rania Abdullah of Jordan, Nobel laureate and pro-democracy leader Aung San Suu Kyi from Myanmar, and youth representative Charles Young of Jamaica. 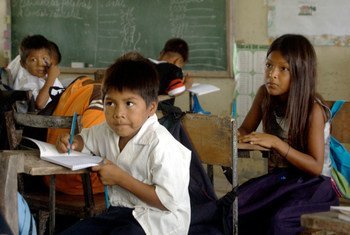 4 September 2012
Over 22 million boys, girls and adolescents in Latin America and the Caribbean are not in school or are at serious risk of dropping out, according to a new United Nations report, which calls for a joint effort across sectors to ensure that all children can complete their education.