OCHA
Aftermath of the devastation caused by Typhoon Bopha.

10 December 2012
The United Nations and its humanitarian partners today appealed to the international community for $65 million to provide immediate lifesaving aid and support in recovery to the millions affected by Typhoon Bopha in the Philippines.

In a news release, the UN Office for the Coordination of Humanitarian Affairs (OCHA), said that the funds would be used for the so-called Action Plan for Recovery, which outlines how the humanitarian community – made up of UN agencies, international and local non-governmental organisations working alongside the Government – will deliver, over a six-month period, assistance to meet the priority needs of survivors.

According to assessments, those needs are emergency shelter, water and sanitation, food and livelihoods.

“The Plan will deliver urgently needed food, water and emergency shelter, and other urgent assistance to 480,000 seriously affected people in the worst hit areas,” OCHA stated. “In the weeks and months to come, support will be provided to assist emotional as well as physical recovery, with particular attention to the needs of the most vulnerable.”

Typhoon Bopha, known locally as Pablo, cut across the southern Philippines between 4 and 7 December, triggering flash floods and landslides, killing hundreds, devastating houses and crops and affecting the lives of millions of people. It is the strongest typhoon to hit the area in decades.

“I have seen total devastation of villages. Neighbourhoods are completely flattened and houses reduced to debris,” the world body’s Humanitarian Coordinator for the Philippines, Luiza Carvalho, said from Davao City in the affected area of southern Mindanao.

“Entire communities, including pregnant women and children, have no shelter,” she said, adding that typhoon’s impact was “beyond imagination” and people desperately needed help.

In the wake of the typhoon, humanitarian agencies immediately began helping the Government to respond by providing assistance, as requested, from existing stockpiles and carrying out joint rapid damage and needs assessments. On 7 December, the Government of the Philippines declared a state of national calamity and accepted the offer of international assistance made by the world body’s Humanitarian Country Team.

In the longer term, OCHA added, the Action Plan for Recovery focuses particularly on the need to rehabilitate the agriculture sector.

The humanitarian agency said that that farmers in Mindanao, one of the poorest areas of the Philippines, have seen their crops devastated, meaning that – in an area highly dependent on subsistence agriculture – thousands are now completely unable to provide for their families.

“I am profoundly moved by the Filipino people and their determination to help each other during this time,” said Ms. Carvalho. “We pledge to work alongside them and the Government for as long as it takes to get everyone back on their feet.”

UN official calls for Bangladesh’s next elections to be ‘peaceful, inclusive and credible’ 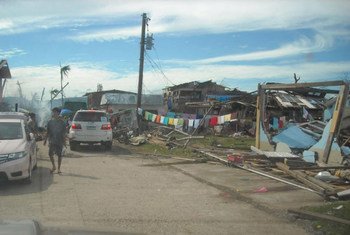 6 December 2012
Secretary-General Ban Ki-moon today voiced his sadness at the loss of life and the serious damage to homes and infrastructure in the Philippines as a result of Typhoon Bopha, and said the United Nations stood ready to assist, according to his spokesperson.