23 January 2013
Macroeconomic fragility and policy uncertainty for investors has led to an 18 per cent decline in global foreign direct investment (FDI) inflows last year, to an estimated $1.3 trillion, the United Nations said in a new report released today.

The Global Investment Trends Monitor, published by the UN Conference on Trade and Development (UNCTAD), added that the 2012 figure is close to that of 2009, when FDI flows reached their lowest level of just slightly over $1.2 trillion.

Global FDI had started to recover, reaching $1.6 trillion in 2011, according to the agency, which noted that it peaked in 2007, when it was close to $2 trillion.

“We thought it was a healthy, steady recovery and now we feel that it will take longer than we expected for the recovery of FDI,” said James Zhan, Director of UNCTAD’s Division on Investment and Enterprise, who added there was “cautious optimism” for this year and next.

“Our estimate is that in 2013 global FDI may grow by around 7 to 8 per cent and in 2014 something like 17 per cent,” he told a news conference in Geneva. “Having said that, we really feel that the risks are quite strong. Many macroeconomic problems have been contained but not resolved, and they can pop up anytime.”

The report – which covers FDI trends in developed, developing, and transition economies, as well as in major developing regions and recipient countries – states that FDI flows fell “drastically” in developed countries to values last seen almost 10 years ago.

“FDI declined sharply both in Europe and in the United States. In Europe, Belgium and Germany saw large declines in FDI inflows,” UNCTAD pointed out in a news release.

FDI inflows to developing nations in Asia fell by 9.5 per cent as a result of declines across most sub-regions and major economies, including China, India, Republic of Korea, Singapore and Turkey.

However, 2012 inflows to Asia were still at the second highest level recorded, accounting for 59 per cent of FDI flows to developing countries. FDI flows to China declined slightly but the country continues to be a major FDI recipient – the second largest in the world.

Latin America and the Caribbean as well as Africa witnessed positive growth in FDI in 2012, the agency added. 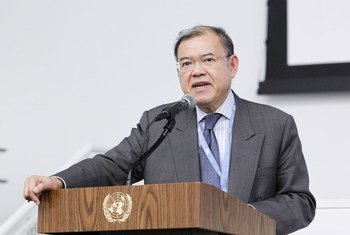 23 October 2012
Drops in foreign direct investment (FDI) entering the United States and the European Union (EU) opened the way for developing countries – for the first time – to absorb half of global FDI flows, the United Nations trade and development agency said in a report released today.