OCHA/David Gough
A displaced family in the suburb of Sanoura in Damascus, Syria.

A UN mission undertaken from 18 to 22 January found that cereal, fruit and vegetable production has been halved in some areas, which have also seen massive destruction of irrigation and other infrastructure, according to the UN Food and Agriculture Organization (FAO).

“The mission was struck by the plight of the Syrian people whose capacity to cope is dramatically eroded by 22 months of crisis,” said Dominique Burgeon, Director of FAO’s Emergency and Rehabilitation Division, who joined with representatives of six other UN agencies in the mission led by the Office for the Coordination of Humanitarian Affairs (OCHA).

“Destruction of infrastructure in all sectors is massive and it is clear that the longer the conflict will last, the longer it will take to rehabilitate it,” he added.

Affected areas in the capital, Damascus, as well as in the governorates of Homs and Dera'a were visited by the mission, which was coordinated with both the Government and the opposition.

The production of poultry, a traditional source of cheap animal protein, has also been severely hit with major farms destroyed in Homs, Hama and Idlib.

In addition, movement of livestock to grazing areas has not been possible and their survival is compromised by the lack of animal feed and veterinary drugs, the importation of which is hampered by sanctions.

Of the 10 million Syrians who live in rural areas – about 46 per cent of the population – 80 per cent derive their livelihoods from agriculture, according to FAO, and the sector is critical for the survival of millions during the crisis.

“It is clear from discussions with NGOs [non-governmental organizations] and technical officers of the Ministry of Agriculture and Agrarian Reform, that security conditions permitting, agriculture has a huge role to play in helping people to stay on their land and generate income to cope with their most urgent needs,” Mr. Burgeon said.

“They however need urgent agricultural support in terms of seeds, fertilizers, animal feed, veterinary drugs, poultry and rehabilitation of irrigation infrastructure,” he said.

Meanwhile, UN Emergency Relief Coordinator Valerie Amos, who last week sounded the alarm over catastrophic humanitarian conditions in Syria at the UN Security Council, brought her plea for an urgent ramp-up of aid to Davos, Switzerland, where the World Economic Forum has convened.

Relaying the results of the multi-agency mission, she said that agency representatives were shocked at what they saw. “They were very clear that the effect of nearly two years of conflict has had a terrible impact on people, especially on children.

“I repeat: four million people need help, two million are internally displaced and 400,000 out of 500,000 Palestinian refugees have been affected,” she said.

She said that despite the dangerous environment that humanitarian partners faced, they were making a difference. “But it is not enough, especially as we cannot keep pace with the rising number of people in acute need,” she stressed.

“We need more people, we need more partners and we need to be able to deliver more quickly,” she added, noting that the humanitarian community had also requested $1.5 billion to help displaced people and their host communities in Syria and neighbouring countries for the next six months.

A funding conference for humanitarian aid for Syria is planned for 30 January in Kuwait, to be hosted by Secretary-General Ban Ki-moon and the Emir of that country, she noted.

“We hope that the conference will yield the resources we need,” she said. 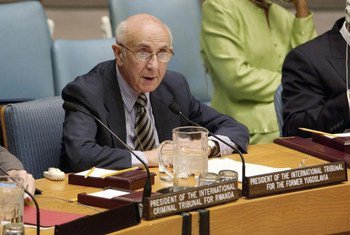 5 December 2012
The United Nations war crimes tribunals set up in the wake of the Balkan conflicts of the 1990s and the 1994 genocide in Rwanda are making progress in completing their work, but still face a myriad of challenges that will require support from the international community, their officials told the Security Council today.