The United Nations human rights office today strongly condemned the execution of Ali Naderi, a 21-year-old who was sentenced to death for a crime he allegedly committed when he was 17 even though Iran is party to agreements that ban the death sentence against persons less than 18 years of age.

“We are deeply dismayed to hear about the reported execution in Iran of a juvenile offender on Wednesday 16 January 2013,” a spokesperson for the Office of the UN High Commissioner for Human Rights (OHCHR), Cécile Pouilly, told reporters in Geneva.

Mr. Naderi was executed for his alleged role in the murder of a woman when he was 17 years old, according to OHCHR. It was the first juvenile execution since September 2011.

“International human rights instruments – particularly the Convention on the Rights of the Child and the International Covenant on Civil and Political Rights – to both of which the Islamic Republic of Iran is a party, impose an absolute ban on the death sentence against persons below the age of 18 at the time when the offence was committed,” Ms. Pouilly said. “We urge the Government of Iran to end the execution of juvenile offenders once and for all.”

OHCHR is also concerned about five other individuals – Mohammad Ali Amouri, Sayed Jaber Alboshoka, Sayed Mokhtar Alboshoka, Hashem Shabain Amouri and Hadi Rashidi – whose death sentences were recently upheld by the Supreme Court and appear to be at risk of imminent execution.

“There are serious concerns about the fairness of their trials and allegations that they were subjected to torture,” Ms. Pouilly said. “We urge the Government to restrict the use of the death penalty, to reduce the number of offences for which it may be imposed and to respect international standards guaranteeing due process and the protection of the rights of those facing the death penalty.”

According to OHCHR, more than 400 people were executed in Iran last year, the majority of whom were charged with drug-related offences that do not meet the threshold of “most serious crimes” to which the death penalty may be applied under international human rights law.

The UN agency also condemned the rise in public executions in Iran, stating they add to the already cruel, inhuman and degrading nature of the death penalty and have a dehumanizing effect on the victim and those who witness the execution. In 2012, 55 public executions were carried out. Last Sunday, two individuals were hung in a park in Tehran, the capital. 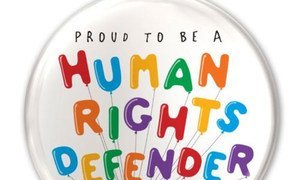 The United Nations human rights office today welcomed the temporary release of lawyer and human rights activist Nasrin Sotoudeh, who is serving a six-year sentence in Iran, and voiced the hope that her leave will be extended and she will soon be released indefinitely.