22 January 2013
The United Nations refugee agency said today it is expanding humanitarian efforts to keep apace with the growing numbers of civilians fleeing the Syrian conflict and crossing into neighbouring countries, while warning that a lack of funding risked jeopardizing future assistance.

The United Nations refugee agency said today it is expanding humanitarian efforts to keep apace with the growing numbers of civilians fleeing the Syrian conflict and crossing into neighbouring countries, while warning that a lack of funding risked jeopardizing future assistance.

According to the UN High Commissioner for Refugees (UNHCR), less than a month after the ambitious and wide-ranging 2013 Syria Regional Response Plan was launched – with the aim of supporting Syrian refugees in Jordan, Iraq, Lebanon, Turkey and Egypt – the UN was still lagging behind in emergency funding.

“So far, UNHCR has only received 18 per cent of the funding it needs,” spokesperson Adrian Edwards told reporters at a briefing in Geneva. “Unless further funds come quickly, thousands of vulnerable Syrians will not benefit from much-needed assistance.”

Mr. Edwards confirmed that the new response plan was already underway through programmes of registration, outreach and financial assistance envisaged in the $1.1 billion initiative, which, together with the 2013 Syria Humanitarian Assistance Response Plan covering relief activities inside Syria, constitutes the UN’s largest short-term humanitarian appeal ever.

The number of Syrians fleeing the continuing conflict experienced a surge, adding to the growing burden placed on refugee camp facilities.

In Jordan alone, the Government has estimated that over 300,000 Syrians have entered the country in the past 22 months, of which 245,000 are accommodated in host communities, with the impact on local infrastructure, such as healthcare and education services, being “notable.”

The country’s Za’atri refugee camp – which in recent weeks flooded as a result of some of the worst weather conditions Jordan has seen in the past 20 years – also experienced “a massive increase in arrival numbers,” according to UNHCR, with 8,821 Syrian refugees crossing the Syrian-Jordanian border in the past five days.

“Refugees have arrived throughout the night and long into the day marking a significant change from earlier trends when the norm was for people to arrive at night,” Mr. Edwards continued, adding that the new arrivals were reporting an “increasing desperation for safety.”

In addition, he noted that although some 7,700 families were now benefiting from UN-sponsored cash support – a 60 per cent increase from November – the funding shortfall had prevented UNHCR from assisting all 8,523 families in need.

In Lebanon, the flow of refugees also appeared to be unabated with an average of 1,500 refugees per day undergoing registration by UNHCR at the agency’s four registration centres across the country.

Mr. Edwards assured that new registration sites were forthcoming and pointed to the already established location in Bekaa, as well as future sites in Tyre and Beirut, which, he said, would reduce waiting periods that currently stand at an average of two months.

“As part of our contingency planning, we are working with the Lebanese authorities to identify two transit sites to accommodate refugees temporarily until appropriate accommodation can be found,” he added. “The aim is to ensure that newly arrived refugees are safe and warm until other accommodation is identified.”

Turning his focus to the Syrian refugee situation in Iraq, Mr. Edwards stated that deteriorating weather conditions had become a primary concern. Last week, heavy snow affected many of the refugees living in the country’s Domiz camp in the Dohuk governorate, with shortages of winter medicines and food further complicating their living conditions.

He stated that UNHCR was working closely with the Government of Iraq, the Kurdish Regional Government, and other UN agencies to step up the distribution of plastic sheeting, mattresses, kerosene, stoves, blankets and quilts.

Meanwhile, in Turkey – which shares its longest common border with Syria – the Government was continuing to provide healthcare and education free of charge to the 156,801 Syria refugees hosted across its 15 camps.

Mr. Edwards added that UNHCR was working closely with the Turkish Red Crescent, to which it supplied 18,500 winter-adapted tents as well as electric heaters, tarpaulins and other provisions aimed at sheltering the refugees from the harsh conditions.

At least 60,000 people, mostly civilians, have been killed in Syria since the uprising against President Bashar al-Assad began in early 2011. Recent months have witnessed an escalation in the conflict, which is now in its 23rd month and has left more than 2.5 million people in need of humanitarian assistance.

At opening of disarmament forum, Ban urges end to stalemate and resumption of talks 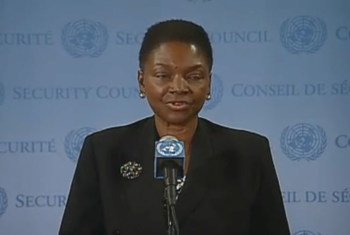 18 January 2013
Two senior United Nations officials today stressed that the continued indiscriminate violence in Syria is worsening the human rights and humanitarian situations faced by civilians as it becomes increasingly difficult for international relief organizations to reach them.