The world is undergoing big changes in the economic, development and political spheres, Secretary-General Ban Ki-moon said today in a lecture at Stanford University, highlighting three essential ways to navigate through this “Great Transition.”

“Throughout the ages, people have said that the world is in the midst of big change. But the level and degree of global change that we face today is far more profound than at any other period in my adult lifetime. I call this period the Great Transition,” Mr. Ban told the audience in Palo Alto, California.

In his speech, entitled ‘The United Nations in a World in Transition,’ the Secretary-General noted that the transition is economic, as engines of growth and economic power continue to shift with the rise of the Asia-Pacific region.

The transition is developmental, as the world seeks a more sustainable path for people and the planet. The transition is also political as landmark change in the Arab world and beyond brings new hope to places that have long been deserts of democracy.

“I believe we face a unique opportunity. Because the changes we face are so profound – the decisions we make will have a deeper and more lasting impact than perhaps any other set of decisions in recent decades,” he said. “We have no time to lose.”

He highlighted three essential ways to navigate through this Great Transition: by truly advancing sustainable development; by helping people meet their aspirations for democracy and dignity; and by empowering women and young people.

“At the current rate, we will soon need two planet earths. But we have only one planet. There can be no Plan B because there is no planet B. Both science and economics tell us that we need to change course – and soon.”

He noted that, with the eighth-largest economy in the world, California has a special role.

“Your state has blazed the trail on clean air legislation – and recently put into effect a first-of-its-kind market-based, cap-and-trade law to reduce greenhouse gas emissions,” he said. “I am convinced national and state action can spur progress in the global negotiations, creating a virtuous cycle. This will help us reach our goal of a legally binding global agreement by 2015.

This is the path to a more sustainable future.”

While working to achieve sustainable development, it is also vital to strive for sustainable peace, the Secretary-General stressed, highlighting in particular the ongoing tragic conflict in Syria.

“You have seen the tragedy play out on your television screens. Neighbourhoods razed. Hospitals destroyed. And this week, a university bombed,” said Mr. Ban. “Syria is in a death spiral. More than 60,000 have tragically lost their lives in bloodshed that will soon enter its third year.”

He noted the constraints faced by the UN in its humanitarian efforts in the Middle Eastern nation, which has been experiencing escalating violence since the uprising against President Bashar al-Assad began in early 2011. Recent months have witnessed an escalation in the conflict, which is now in its 23rd month.

The UN humanitarian appeal is less than 50 per cent funded, while access continues to be a problem, with UN and other humanitarian actors not able to physically reach all people in need. Meanwhile, diplomatic efforts continue in the hope of finding common ground and resolving the Syria crisis.

Mr. Ban also cited ongoing efforts to help Mali counter terrorism and restore constitutional order, as well as to ensure peace, justice and human rights in the Arab World and beyond.

He also spoke about the fight for full equality of the lesbian, gay, bisexual and transgender community around the world, saying that “expanding the frontiers of opportunity and human rights also sometimes requires us to broaden our own boundaries of understanding.”

This time of Great Transition is also a period of great opportunity, according to the UN chief. “And I believe with your help and support, the United Nations and the international community can and will step up,” he said. Among those in the audience at Stanford University today was 95-year-old Libba Patterson, the woman who hosted Mr. Ban in her home in Novato – a city outside San Francisco – in 1962 when he was a young student on his first-ever trip outside his home country of the Republic of Korea.

While at Stanford, the Secretary-General is also expected to meet with university and local dignitaries, including former United States Secretary of State Condoleezza Rice and former Defense Secretary William Perry. He wraps up his visit tomorrow with a speech at the Monterey Institute of International Studies. 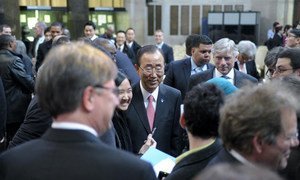