UN Photo/E. Schneider
Secretary-General Ban mixes with students and educators at the Global Colloquium of University Presidents at Columbia University, where he delivered a keynote speech on youth.

“Young people everywhere deserve the power to get information, to connect and to ask hard questions – about justice, equality and opportunity. Our job is to listen to youth and answer their calls,” Mr. Ban said in his keynote address to the Global Colloquium of University Presidents at Columbia University, entitled ‘From Youth Explosion to Global Transformation: Unleashing the Power of Youth People.’

The Colloquium is an annual meeting of university presidents from around the world, in which a topic of immediate concern to higher education leaders and of particular interest to the Secretary-General and the international community is discussed. Mr. Ban’s speech focussed on the role of three elements in achieving progress: education, employment and empowerment.

“Around the world, countries are bringing more children into classrooms, but still, more than 125 million young people cannot read or write,” Mr. Ban said. “Two thirds of all illiterate people are women. This is a problem for those millions of individuals, but it is also our problem. Because when we hold women back, we hurt progress for all people.”

Mr. Ban underlined that educating girls is particularly crucial so that they can contribute to their communities and boost countries’ economies through their work and knowledge. In addition, he underscored that educating women on reproductive health is important as they can help prevent HIV/AIDS and maternal death.

“Learning can be a matter of life or death – especially when it comes to information on reproductive health. Every minute and a half, a woman dies in pregnancy or childbirth. Many of them are just teenagers. Their lives could be saved with the right information and supplies,” he said.

Mr. Ban also stressed the need to provide employment opportunities to the 74 million young people who are unemployed worldwide, and warned that a lack of jobs can lead to social unrest, as shown by the civil uprisings in North Africa and the Middle East over the past year.

“The Arab Awakening was a season of hope and expectation. At the time, I told the region’s leaders: listen to your people. They were not only talking about democracy. Many young people were looking for a better future with decent jobs and decent pay,” the UN chief said, adding that in the next decade, Arab countries need to create 50 million jobs for new people joining the workforce.

Education and employment should also be coupled with empowerment, Mr. Ban said. He called on countries to encourage young people’s potential and participation in society.

“To unleash the power of young people, we need to partner with them,” he said, adding that the UN is boosting its own efforts to work for and with youth on issues affecting them, such as joblessness, political inclusion, human rights and sexual health, as well as the appointment of a Special Advisor on Youth.

“After I made the announcement, youth organizations with 100 million members wrote me a letter,” the Secretary-General added. “They said: ‘It is up to you to prove that the UN’s commitment to empower young people is what you believe in and what you are striving for!’ I take these words very seriously.” 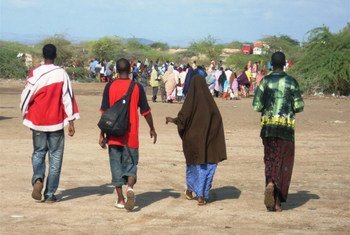 27 February 2012
Governments, corporations and policy-makers must do more to realize the potential of young people worldwide, Deputy Secretary-General Asha-Rose Migiro said today, calling for action to overcome the structures and problems that are keeping youth unemployment rates high around the worldwide.