FAO/Jean Di Marino
Margerita, a South Sudanese farmer, sows the seeds for her maize crop for next year.

15 January 2013
Some 30,000 vulnerable farmers in South Sudan will be able to benefit from a new United Nations programme that aims to improve their livelihoods by boosting the quality of the seeds they use to produce key crops.

The $612,000 programme, which will be implemented with the support of France and South Sudan’s ministry of agriculture, will target several states for one year, training farmers in the production, storage and marketing of quality seeds and cuttings of staple crops such as maize, cassava, cowpeas and sorghum.

“The importance of seeds to the food security and livelihoods of South Sudan’s farmers and rural communities is very high,” said the head of the Food and Agriculture (FAO) office in Juba, Sue Lautze. “Despite widespread food insecurity, the country is committed to ensuring food security for all, as soon as possible. Seeds are a critical component to realizing this important ambition.”

According to FAO, decades of conflict and displacement have taken their toll on farmers’ access to quality seeds and other planting materials, and eroded their knowledge of seed production techniques, which undermine crop productivity.

Today, more than 90 per cent of South Sudanese farmers still depend on the informal seed system, which is based primarily on saved seeds, social networks, and local markets. Typically, farmers use saved seeds from one season to the next, which lessens the genetic purity of the seed.

The programme will increase the availability and quality of seeds to South Sudan’s most vulnerable farmers in the states of Central Equatoria, Western Equatoria, Lakes, Western Bahr el Ghazal and Northern Bahr el Ghazal. It will also provide assistance to 400 seed producers.

“Through the project, FAO aims to not only reduce the number of households affected by food insecurity through improving the availability and access of locally produced quality seed on the market, but also aims to improve the incomes and capacity of seed producers,” said the Project Officer with FAO South Sudan, Joseph Okidi.

The project will include seed fairs, capacity development for seed enterprises, and training for farmers. It will also increase the amount of land dedicated to quality-seed multiplication, which is currently very limited.

In 2011, FAO and France implemented a similar programme in South Sudan, which led to the production of more than 350 tons of quality seeds and planting materials, and injected some $300,000 into the local economy. With the new programme, the agency is hoping to build on the previous success. 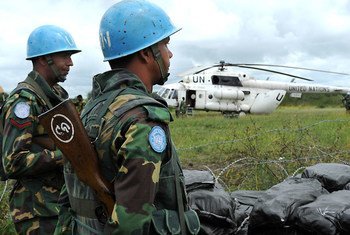 21 December 2012
Secretary-General Ban Ki-moon has condemned the shooting down today of a United Nations helicopter in South Sudan – killing all four crew members onboard – by the country’s armed forces and called for those responsible to be held to account, his spokesperson said today.