Here, in the second of a series providing a snapshot of the Main Committees, the UN News Centre takes a look at the Second Committee.

The General Assembly considered 13 reports of its Second Committee and took action on 38 draft resolutions and 3 draft decisions contained in the reports. (December 2012) UN Photo/Ryan Brown

Increasingly, even the richest and most powerful countries cannot go it alone and must look to international collaboration to find ways to shore up the underpinnings of the world economy.

That is where the General Assembly’s Second Committee – which deals with economic and financial matters – comes in, debating strategies and initiatives that will guide countries as they address issues that lie at the heart of all economies.

“The Second Committee must show leadership in the design of coherent and coordinated approaches, at the national and international levels, to address the vicious cycle of low growth, rising unemployment, and financial sector fragility,” Ambassador George Talbot of Guyana, the current Chair of the Committee, told delegates as they began their work in early October.

“We must provide ideas for the redesign of policies to strengthen the impact on poverty and in employment, and on the promotion of structural change for a more sustainable future for all,” he continued.

The ambassador presides over a body whose work has grown in complexity and breadth as it covers issues including sovereign debt, poverty eradication, climate change, energy, the situation of landlocked countries, and information and communication technologies.

While the links may not be immediately obvious, all of these issues have a significant impact on countries’ economies, and the Second Committee provides new frameworks and guidelines that assist in addressing the various challenges posed by these issues.

“After all the speeches and talk at the General Assembly it is really interesting to see how countries go about getting into the nitty-gritty of issues. Sometimes it can come across as very dry, but this is where the action happens,” said one information officer covering the Committee’s debates.

Last year, the Second Committee took action on 43 draft proposals and it was expected to act on a similar number of proposals during the 2012 session. In particular, sustainability and the post-2015 development agenda have become some of the main subjects permeating its work, as countries set out to prioritize the implementation of policies that not only promote economic prosperity and reduce poverty, but also protect the environment and foster inclusiveness and social equity in the long-term.

For example, in June, countries came together to reaffirm their commitment to sustainability at the UN Conference on Sustainable Development (Rio+20), which took place in Brazil in June this year.

President of the 66th session of the General Assembly, Nassir Abdulaziz Al-Nasser (centre), confers with colleagues at the session's plenary meeting during which it heard the reports of the Second Committee. (December 2011) UN Photo/Devra Berkowitz

Some of the work raised at Rio+20 was approved by the Committee in this year’s session. This includes proposals for the General Assembly to implement scientific methods to assess, monitor and reverse desertification and land degradation; promoting ecotourism to help poverty eradication and environmental protection; and increasing nations’ capacities, particularly those of developing countries, to prevent and respond to natural disasters.

In addition, the Committee approved a text calling for an increase in the share of new and renewable sources of energy which would make an important contribution to enhancing universal access to sustainable modern energy services – a key issue for Secretary-General Ban Ki-moon, who has launched an initiative known as Sustainable Energy for All.

A participant at a meeting of Second Committee to elect the bureau and consider the work for the General Assembly's 58th Session. (October 2003) UN Photo/S. Hollyman

Using a deadline of 2030, its objective is to mobilize all sectors of society in order to provide universal access to modern energy services; doubling the global rate of improvement in energy efficiency; and doubling the share of renewable energy in the global energy mix.

If sustainable development is to become a reality, governments and others are urged to combine increased use of new and renewable energy resources to ensure more efficient energy use, greater reliance on advanced energy technologies, including cleaner fossil fuel technologies, and the sustainable use of traditional energy, in order to meet the growing need for energy services in the longer term.

“This Committee has made historic decisions that have helped prevent crises, inspire visionary changes and put the world on a more sustainable path,” the UN Under-Secretary-General for Economic and Social Affairs, Wu Hongbo, told the Committee during its opening session.

“As we continue to grapple with multiple challenges, we need, above all, continued leadership and commitment,” he said. “The choices we make now will shape the UN development agenda for a generation.”

The UN’s operational activities for development is a key issue for the Second Committee, as the UN development system responds to the needs and priorities of developing countries as owners and drivers of their own future. This is especially important as the 2015 deadline for reaching the anti-poverty targets known as the Millennium Development Goals (MDGs) is approaching. The eight MDGs set specific targets on poverty alleviation, education, gender equality, child and maternal health, environmental stability, HIV/AIDS reduction, and a ‘Global Partnership for Development.’

“We look to the General Assembly and this Committee to present us with a resolution that truly reflects the development problems, opportunities and potential solutions of our times,” the world body’s Deputy Secretary-General, Jan Eliasson, told the Committee at one of its meetings.

“United Nations operational activities for development help millions of poor people around the world,” Mr. Eliasson added. “We owe them our best and most serious efforts. We must place human beings at the centre.” 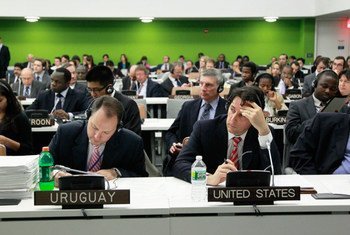