UN Photo/Mark Garten
Lakhdar Brahimi, Joint Special Representative of the UN and the League of Arab States for Syria.
27 December 2012

Calling for “real change” in Syria, the Joint Special Representative of the United Nations and the League of Arab States for the war-torn country, Lakhdar Brahimi, said today a Syrian transitional government with full executive powers “must be” created until elections can be held.

Speaking in Damascus, Mr. Brahimi also elaborated on the idea of deploying an international peacekeeping force to the country to monitor a hoped-for peace deal that would end violence that has killed tens of thousands of Syrians.

“The change required is not cosmetic,” Mr. Brahimi told journalists in the Syrian capital at the end of a five-day trip to the country, during which he met with President Bashar al-Assad.

“Syria and the Syrian people need, want and look forward to real change. And the meaning of this is clear to all,” he added.

Mr. Brahimi’s call reflects a plan that emerged six months ago from an international meeting in Geneva on Syria for the establishment of a national unity government for the country, which has been gripped by violence since protests that began against Mr. al-Assad 21 months ago turned into a revolt amid a crackdown by authorities.

Since the unveiling of the so-called “Geneva communiqué,” forces opposed to Mr. Assad have gained territory as well as a number of military installations in Syria’s north, media reports say. Anti-Assad forces are also reported to be expanding their presence in Damascus.

Mr. Brahimi said that a failure by the Syrians themselves to find a solution to the conflict meant that the international community needed to step up its collective efforts to help them.

The UN-Arab league envoy will be in Moscow this Saturday for talks, and said he plans to hold additional meetings with United States and Russian officials after two earlier rounds of talks with top officials of those countries earlier this month.

“These two countries have influence and a global responsibility, which qualifies them to help in searching for solutions that we look forward to in Syria,” Mr. Brahimi said.

The official noted that statistics no longer conveyed the full horror of what was unfolding in the Syria.

“The truth is, when one mentions figures, they appear cold,” he said. “When one says there are (four) million internally displaced (people), what does it mean?”

Mr. Brahimi warned that current projections placed the number of people driven by the conflict to other countries in the region as refugees would exceed one million by the middle of next year, up from half a million registered refugees now.

In calling for a transition government, the Joint Special Representative signalled that there could be no compromise over its level of powers.

“What must be established is a government with full executive powers…” he said. “All the powers of government should be with this government.”

While he also said that the transitional period should not be allowed to lead to the collapse of the state or its institutions, he left open the possibility that the eventual elections could be for a reformed leadership structure.

The envoy said peacekeepers were needed to provide “strong observation” of a peace deal, but insisted that such a deployment would not constitute an international occupation of the country.

“These are not foreign forces; they only come with the agreement of the parties,” he said. “When we reach a stage of speaking about peacekeeping forces, it means that there is an agreement, and, thankfully, the parties have agreed that they need these forces.”

Mr. Brahimi’s talks in Syria marked his third visit to the country since becoming the international Syria envoy in August. He said he told not only Mr. Assad, but also opposition groups he met both “inside and outside” the country, of his proposals for peace.

“The talks are still ongoing,” he said, adding that Syrians have to resolve their differences, but with “a lot of help from the outside.”

Mr. Brahimi has also been engaged in a series of other meetings in the region and elsewhere as part of his efforts to bring about a negotiated, political solution to end to the fighting in Syria.

He has previously stated that a peace process could be based on the Geneva communiqué, which was issued after a meeting in the Swiss city of the so-called Action Group for Syria in late June and which lays out key steps in a process to end the violence in Syria.

Amongst other items, the Geneva communiqué called for the establishment of a transitional governing body, with full executive powers and made up by members of the present Government and the opposition and other groups, as part of agreed principles and guidelines for a Syrian-led political transition. 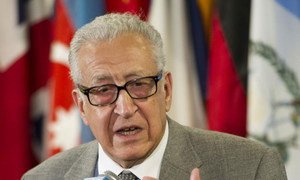