Secretary-General Ban Ki-moon has strongly condemned the armed attacks on several towns in the Central African Republic (CAR) perpetrated by the coalition of rebel groups known as ‘SELEKA,’ and called on all parties to refrain from acts of violence against civilians.

The rebels reportedly captured the northern city of Bambari on Sunday, having earlier seized the area around Bria, and are now said to be advancing toward the capital, Bangui.

“These developments gravely undermine the peace agreements in place and the efforts of the international community to consolidate peace in the Central African Republic,” Mr. Ban’s spokesperson said a statement issued on Wednesday night.

“The Secretary-General deeply regrets the loss of life and population displacement caused by the fighting,” the spokesperson added.

He further noted that Mr. Ban appealed to all parties to refrain from “any acts of violence against civilians, including sexual and gender-based violence,” and to ensure the protection of civilians and to respect human rights, in conformity with international instruments to which CAR is a party.

The UN chief also urged all parties to abide by the decisions of the Summit of the Heads of State of the Economic Community of Central African States (ECCAS), held in the Chadian capital of N’Djamena on 21 December, which provide a basis for a peaceful resolution of the dispute.

In addition, the Secretary-General reminded the CAR Government of its responsibility to ensure the safety and security of UN personnel and its premises. The world body is temporarily relocating dependents and non-essential staff amid the latest violence.

“The temporary relocation is a precautionary measure to reduce our presence in the event the security situation further deteriorates in Bangui,” said UN spokesperson Martin Nesirky. “The decision is temporary and will not detract from the ability of the United Nations to continue its support to the peace consolidation and development efforts in the Central African Republic.”

Meanwhile, the Secretary-General’s Special Representative and Head of the UN Integrated Peacebuilding Office in the CAR (BINUCA), Margaret Vogt, continues to engage the Government and the rebel leaders with a view to ensuring a ceasefire and initiating dialogue, as recommended by ECCAS on 21 December.

Earlier this month, Ms. Vogt condemned all violations of the 2008 peace accord which helped bring a degree of stability to CAR, which has a history of political instability and recurring armed conflict. State authority is weak in many parts of the country, which are largely controlled by rebel groups and criminal armed groups, according to the UN Department of Political Affairs (DPA).

BINUCA had played a key role in encouraging the signing of the so-called Libreville Comprehensive Peace Agreement between the Government and three main rebel groups, as well as the holding in December 2008 of the Inclusive Political Dialogue between the Government, rebel groups, the political opposition, civil society and other relevant stakeholders.

In yesterday’s statement, Mr. Ban confirmed the UN’s readiness to continue to support CAR in overcoming challenges to the consolidation of peace, in collaboration with regional and international partners. 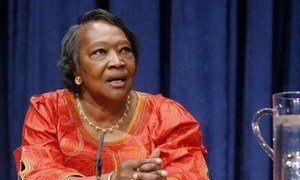 A United Nations senior official today condemned all violations of a 2008 peace agreement which helped bring a degree of stability to the Central African Republic (CAR), and urged the peaceful resolution of any disputes there.