14 December 2012
Representatives from Cameroon and Nigeria ended today a meeting over the demarcation of the boundary between the two countries with a reaffirmation of their willingness to expedite the process in relation to the land-based areas which remain to be identified, according to the United Nations Office for West Africa (UNOWA).

Members of the so-called Cameroon-Nigeria Mixed Commission had been meeting in the Nigerian capital of Abuja – their thirtieth meeting so far – on the implementation of an International Court of Justice (ICJ) judgment regarding the demarcation of the boundary between the two neighbouring nations, UNOWA said in a news release.

In line with reaffirming their willingness to expedite the process for the land-based boundary areas, the parties reviewed their work programme so as to deploy a Joint Technical Team, composed of surveyors and experts, to the field as early as February 2013. They also decided to move forward with a pillar emplacement project.

The border had been the subject of intense and sometimes violent disputes between the West African countries for decades until they agreed to a UN-backed process to settle the matter.

The ICJ, the principal judicial organ of the United Nations, resolved the issue with a ruling on the land and maritime boundary between the two countries in October 2002. The verdict was followed by the 2006 Greentree Agreement – signed under the auspices of former UN Secretary-General Kofi Annan – under which Nigeria recognized Cameroonian sovereignty over the Bakassi Peninsula, one part of the border.

The head of UNOWA, the Secretary-General’s Special Representative for West Africa, Said Djinnit, serves as the chairman of the Commission, which was established in November 2002 by the United Nations – at the request of Presidents Paul Biya and Olusegun Obasanjo of Cameroon and Nigeria, respectively – with the goal of facilitating the implementation of the ICJ ruling.

To date, more than 1,845 kilometres out of a total boundary distance believed to exceed 2,000 kilometres have been located on the ground by the Joint Technical Team.

The demarcation of the land boundary is the third component of the mandate of the Commission, UNOWA noted. The two countries agreed on the delimitation of the maritime border in 2007, and the withdrawal and transfer of authority in the Lake Chad area, along the land border and in Bakassi Peninsula, was finalized 2008.

The meeting in Abuja also stressed the importance of the fourth component of the mandate, which is addressing the needs of the population affected by the demarcation through confidence-building initiatives and cross border socio-economic projects.

“Addressing the needs of the affected populations is key, as this will not only to give a human dimension to the technical and political processes of the demarcation, but also to bridge the communities together across border in lasting peace,” said Mr. Djinnit.

He also congratulated Cameroon and Nigeria and their respective leaders, President Paul Biya and President Goodluck Ebele Jonathan, for their “unwavering commitment” to the peaceful implementation of the ICJ judgment, UNOWA added.

Attending the gathering, the world body’s Resident Coordinators in Cameroon and Nigeria demonstrated progress in the development of joint program proposals on poverty reduction for the benefit of the people.

UNOWA said these include projects in infrastructure, food security, energy and environment, as well as education and capacity building for employment. It added that these will be implemented by UN agencies in collaboration with the two Governments, in addition to existing national programs. Donors will be approached to raise the necessary funds.

Established in 1945 under the UN Charter, the ICJ – sometimes referred to as the World Court – settles legal disputes between States and gives advisory opinions on legal questions that have been referred to it by authorized UN organs or specialized agencies. 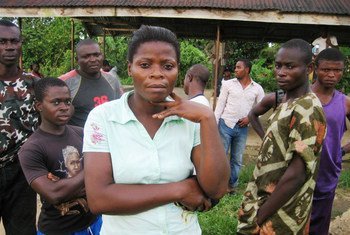 11 October 2012
United Nations Secretary-General Ban Ki-moon commended Cameroon and Nigeria for their commitment in honouring the ruling of the International Court of Justice (ICJ) over their shared border, marking the tenth anniversary of this decision and stressing that both countries are a positive example of settling disputes peacefully.