13 December 2012
The United Nations Security Council has expressed “serious concern” over the lack of progress in the restoration of constitutional order in Guinea-Bissau.

In addition, in a press statement issued today, the 15-member body noted that stabilisation can only be achieved in the West African nation through a consensual, inclusive and nationally-owned transition process, based on genuine dialogue and effective civilian oversight over the military.

Guinea-Bissau has a tumultuous history of coups, misrule and political instability since it gained independence from Portugal in 1974. Most recently, rogue soldiers seized power in a military take-over on 12 April – just days ahead of the country’s 22 April presidential run-off election –prompting calls from the international community for the return to civilian rule and the restoration of constitutional order. Recent incidents include an attack on a military base in October, which reportedly resulted in numerous deaths.

Against that backdrop, ongoing advocacy and mediation efforts, spearheaded by the UN Integrated Peace-Building Office in Guinea-Bissau (UNIOGBIS) and the African Union, have been aimed at reviving dialogue between the country’s political players.

On Tuesday this week, Council members held consultations on the situation in the African country, at which the Secretary-General’s Special Representative and head of UNIOGBIS, Joseph Mutaboba, took part.

Also, the Permanent Representative of Morocco to the United Nations, in his capacity as Chair of the Committee established pursuant to the Council’s resolution 2048, also briefed the 15-member body on the activities of the Committee.

The Council members also condemned the armed attacks which took place on Guinea-Bissau’s Bissalanca Air Force Base on 21 October, and “expressed deep concern over the reports of killings and serious human rights violations, as well as of continued restrictions on freedom of assembly, opinion and information in the aftermath of those attacks.”

They also expressed concern over reports of threats and intimidation acts against UN personnel, reaffirmed the need to ensure the safety and security of UN personnel and demanded that UNIOGBIS is allowed to fulfil its mandate, in accordance with relevant Council resolutions.

“They further demanded that these events be fully investigated and their perpetrators be brought to justice,” the statement noted, adding that, in this context, they welcomed the opening of the 2012-2013 session of the National Assembly as a first step towards an inclusive political process and await “its agreement on a clear and credible timetable for the organization of free, fair and transparent presidential and legislative elections, in line with national legislation and international standards.”

The importance of coordination of international efforts to address the crisis in Guinea-Bissau was also re-affirmed by the Council members, and, in that context, they welcomed the decision of the United Nations, the African Union, the Economic Community of West African States, the Community of Portuguese Language Countries and the European Union to send a joint assessment mission to Guinea-Bissau in December to assess the political and security situation and facilitate the formulation of recommendations on how best these organizations can work together to assist Guinea-Bissau in a number of key areas for long-term stability. 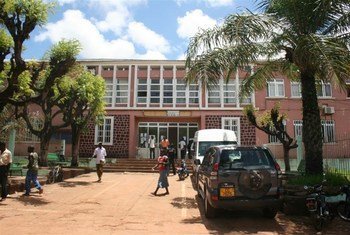 22 October 2012
The United Nations condemns an attack on a military base in Guinea-Bissau which resulted in numerous deaths, a spokesperson for the world body announced today.