Policy-makers and survivors convened at United Nations Headquarters in New York today to build consensus and identify common strategies on ending the pandemic of violence against women and girls.

The two-day forum, hosted by the UN Entity for Gender Equality and the Empowerment of Women (UN Women), seeks to enhance dialogue, build alliances and raise awareness of the existing global commitments and standards for ending a scourge that affects millions of women and girls worldwide.

It will also prepare inputs for the March 2013 session of the UN Commission on the Status of Women (CSW), which will review experiences, lessons learned and best practices on ending violence against women.

“Eliminating violence against women must be our common effort and can be our common achievement,” UN Women’s Deputy Executive Director, Lakshmi Puri, said in her opening remarks to the gathering of governments, activists, civil society and the UN system.

“This is an issue that concerns us all, involves us all and requires concerted and urgent action. Achievements for gender equality and women’s empowerment will be negated if we allow violence against women to persist,” she added.

Up to seven in ten women continue to be targeted for physical and/or sexual violence in their lifetime, according to UN Women. In addition, 603 million women live in countries where domestic violence is still not a crime.

Ms. Puri noted that women and girls are at risk of violence when carrying out essential daily activities – within their homes, or while walking, taking public transport, collecting water or firewood.

“It occurs in all countries, contexts and settings and is one of the most pervasive violations of human rights,” she stated. “Ending violence against women is not about demanding exceptional treatment. It is simply about letting women live in dignity.”

Recalling the numerous resolutions and conventions States have been adopted in the past on the issue, the UN official said now is the time for governments to translate international promises into concrete national action.

“We have seen many good practices in recent years,” she said. “It is essential to look at the evidence, at ‘what works’ to address violence against women. Such experiences can serve as inspiration and motivation for others and be the engine for replication and scaling up.”

She added that the forum will be an opportunity to share evidence from the ground and to demonstrate that, when governments make adequate political and financial commitments, it is possible to see progress in eliminating violence against women.

Earlier this year, UN Women launched the COMMIT initiative, urging world leaders to announce proposals to end violence against girls and women and to showcase these commitments to the public.

The forum will also feature an event today with women survivors of violence who have used their experience to influence policy development and legislative reform and implementation on ending violence against women in their countries or communities. 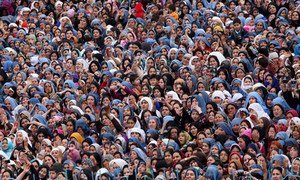 Secretary-General Ban Ki-moon is leading a United Nations call on world leaders to “make good” on pledges they have made to end violence against women, a scourge that affects millions of women and girls worldwide.