ICTY
Courtroom 1 of the International Criminal Tribunal for the former Yugoslavia (ICTY).

12 December 2012
A United Nations war crimes tribunal today sentenced a former Bosnian Serb military chief to life imprisonment after convicting him of genocide and other crimes linked in part to the murders of Bosnian Muslim men and boys at Srebrenica in 1995.

A United Nations war crimes tribunal today sentenced a former Bosnian Serb military chief to life imprisonment after convicting him of genocide and other crimes linked in part to the murders of Bosnian Muslim men and boys at Srebrenica in 1995.

Zdravko Tolimir, 64, had been the former Assistant Commander and intelligence chief of the Bosnian Serb Army, which served the self-proclaimed Serbian Republic in the east of the internationally recognized territory of Bosnia and Herzegovina following that country’s break with the former Yugoslavia.

The International Criminal Tribunal for the Former Yugoslavia (ICTY), which sits in The Hague, found him guilty of taking part in two 1995 joint criminal enterprises (JCEs), one being what quickly become known in the media as the ‘Srebrenica massacre,’ and the other involving the removal and deportation of Bosnian Muslims from both Srebrenica and Zepa, a second enclave in the breakaway Serbian Republic, according to an ICTY news release.

ICTY said a majority of a three-judge panel of the tribunal convicted Mr. Tolimir of genocide, conspiracy to commit genocide, murder as a violation of the laws or customs of war, as well as extermination, persecutions, inhumane acts through forcible transfer and murder as crimes against humanity. He was found not guilty of the crime of deportation as a crime against humanity.

According to the ICTY release, the court majority ruled that the Serbian Republic had decided by 1992 to remove the Bosnian Muslim population from eastern Bosnia and Herzegovina, and found that Mr. Tolimir participated in the JCEs that aimed to fulfil the policy.

The court majority also found that the “combined effect of the forcible removal and murder operation had a devastating effect on the physical survival of the Bosnian Muslim population of Eastern Bosnia and Herzegovina,” adding it was “satisfied that these operations were aimed at destroying this population.”

The number of Muslim men killed from Srebrenica had approached 6,000 “at a minimum,” according to the court majority, ICTY noted.

“The suffering these men went through in the moments leading up to their deaths must have been unbearable,” the ICTY release quoted the court majority as saying. “On many occasions, those who were waiting to be shot saw others before them executed.”

Between 30,000 and 35,000 women and children were forcibly removed from both Srebrenica and Zepa, according to the court majority, which added that the victims’ “extreme suffering” had rendered them unable to live a “normal and constructive life to this day,” the ICTY release stated.

“Removing the Bosnian Muslim civilian population from Zepa, demolishing their homes and the mosque, and killing three of the most prominent local leaders was carried out to ensure that the Bosnian Muslim population of this enclave would not be able to reconstitute itself,” the ICTY release added, citing the court majority.

Indicted in 2005, Mr. Tolimir spent two years on the run before his arrest in Serbia and transfer to The Hague in 2007. His trial began in February 2010.

The trial of Mr. Tolimir has been among 12 ICTY proceedings dealing with a range of crimes committed by the Bosnian Serb forces against Bosnian Muslims during and after the July 1995 fall of Srebrenica and Zepa, which were at the time UN protected zones. Six of the cases have been completed.

Established in 1993 by the UN Security Council, ICTY has to date indicted 161 people for serious violations of humanitarian law committed on the territory of the former Yugoslavia between 1991 and 2001. Proceedings against 130 people have been concluded.

Security Council welcomes arrest of fugitives sought for crimes in the Balkans, Rwanda 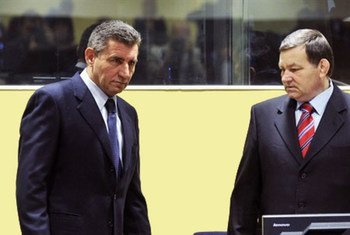 16 November 2012
A United Nations war crimes tribunal today overturned the convictions of two former Croatian generals who were found guilty last year of various crimes against humanity during the Balkan conflicts of the 1990s, and ordered that they be released immediately.