ICTY
Courtroom 1 of the International Criminal Tribunal for the former Yugoslavia (ICTY).
17 August 2012

A former Serb military official was transferred to Portugal to serve a 20-year sentence for crimes committed against non-Serb prisoners of war, the United Nations war crimes tribunal set up in the wake of the Balkan conflicts of the 1990s announced today.

On 27 September 2007, Mile Mrkšic, a former Colonel within the Yugoslav People’s Army (JNA), was sentenced by the International Criminal Tribunal for the former Yugoslavia (ICTY) to 20 years in prison for aiding and abetting the murder, torture and cruel treatment of prisoners, as well as the inhumane conditions of detention at the hangar of Ovcara near the Croatian town of Vukovar between 20 and 21 November 1991.

Following the fall of Vukovar to JNA and Serb paramilitary forces, the JNA loaded about 260 non-Serbs from the Vukovar hospital onto buses and transported them first to JNA barracks and then to a pig farm at Ovcara, where they were subjected to severe beatings that lasted for hours.

During the trial, the ICTY found that later that evening, Mr. Mrkšic withdrew the JNA troops, leaving the prisoners to the mercy of paramilitaries who then killed and buried at least 194 of them in a mass grave at Ovcara.

JNA forces had established inhumane conditions of detention, and Mr. Mrkšic, who commanded the forces, failed to act effectively to ensure that the prisoners were properly protected.

Portugal is one of 17 countries that have signed an agreement with the ICTY, which is based in The Hague in the Netherlands, to enforce the tribunal’s sentences. Mr. Mrkšic is the first convicted person to be transferred to Portugal.

In a news release, the ICTY commended the Portuguese authorities for their support in ensuring the enforcement of the Tribunal’s sentences, and called on Member States to assist it in securing additional enforcement capacity.

Since its inception 19 years ago, the Tribunal has indicted 161 persons for violations of humanitarian law committed on the territory of former Yugoslavia between 1991 and 2001. Proceedings against 126 persons have been concluded, and are currently ongoing for 35 accused individuals. 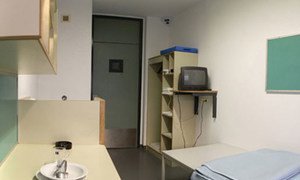 A former senior Bosnian Serb police officer convicted of war crimes and crimes against humanity by a United Nations tribunal has been transferred to Denmark to serve the remainder of his 17-year prison sentence.