The head of a key United Nations child rights committee today expressed deep dismay over the execution in Yemen last week of a woman who was believed to have been “around 15 years old” when she was arrested.

The execution of Hind Al-Barti was a “clear violation” of a binding UN treaty banning capital punishment in cases where the accused was a minor at the time of the offence, said the Chairperson of the Geneva-based UN Committee on the Rights of the Child (CRC), Jean Zermatten.

“It is deplorable that this execution took place despite assurances given by Yemen to the Committee in June 2005 that the death penalty, torture and other cruel, inhuman or degrading treatment or punishment of persons for having committed crimes when under the age of 18, had been abolished by the Penal Code,” Mr. Zermatten said, according to a news release from the Office of the UN High Commissioner for Human Rights (OHCHR).

According to media reports in Yemen, Ms. Al-Barti had been convicted of killing a girl about seven years ago, and was shot by firing squad at the central prison of the Yemeni capital of Sana’a on 3 December.

Made up of 18 independent experts – persons of high moral character and recognized competence in the field of human rights – the CRC is the body that monitors implementation of the Convention on the Rights of the Child by its State parties, in addition to monitoring implementation of two optional protocols to the Convention, one on the involvement of children in armed conflict and the other on sale of children, child prostitution and child pornography.

Noting that death sentences had already been imposed on 21 other juveniles aged less than 18 at the time the offences occurred, Mr. Zermatten issued an urgent appeal to the Government of Yemen to both immediately halt all executions and take “effective measures to remove juvenile prisoners from death row.”

The Convention on the Rights of the Child, adopted by the UN General Assembly in 1989, not only proclaims the inherent right of every child to life, but provides that neither capital punishment nor life imprisonment without possibility of release shall be imposed for offences committed by minors, Mr. Zermatten said.

OHCHR said Yemen additionally committed to comply with the Convention when it underwent scrutiny of its human rights record in 2009 as part of the UN Human Rights Council’s Universal Periodic Review mechanism, which probes the human rights records of all UN Member States.

OHCHR said the execution of Ms. Al-Barti came after Yemen reportedly executed another juvenile on 18 January of this year. The UN agency added that a “variety of sources” have indicated the country executed 14 juveniles between 2006 and 2010.

“We are not only outraged that child offenders continue to be executed in Yemen in flagrant contravention of international law, but we are also deeply concerned over the increased number of sentences of capital punishments pronounced against children,” Mr. Zermatten said.

He said information the CRC has received showed that three juveniles in particular were at “great risk” of being executed after the Yemeni Supreme Court confirmed their sentences, and the Yemeni President reportedly ratified the verdicts.

The three are Waleed Hussein Haikal and Mohammad Abduh Qasim al-Taweel, who were each 15 at the time of the offences for which they were convicted, and Mohammad Taher Samoum in Ibb, who was aged 13 when he allegedly committed a capital crime.

♦ Receive daily updates directly in your inbox - Subscribe here to a topic.
♦ Download the UN News app for your iOS or Android devices.
rights of the child 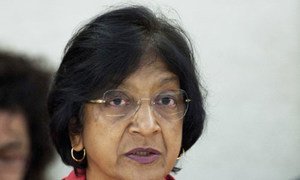 All forms of legalized violence against children, including the death sentence, life imprisonment without parole and corporal punishment, are clear violations of their rights, the United Nations human rights chief stressed today.