UNHCR/B. Bannon
Climate change is a growing cause of displacement in Africa, where some areas have been devastated by drought.
8 December 2012

Secretary-General Ban Ki-moon on Saturday welcomed the outcome of the United Nations Climate Change Conference in Doha, saying it paves the way to a comprehensive, legally binding agreement by 2015.

The two-week meeting of the Parties to the UN Framework Convention on Climate Change (UNFCCC), the parent treaty of the 1997 Kyoto Protocol, wrapped up today in the Qatari capital, with delegates reportedly agreeing to extend the Protocol, whose first commitment period expires at the end of this year, until 2020.

Under the Protocol, 37 States – consisting of highly industrialized countries and countries undergoing the process of transition to a market economy – have legally binding emission limitation and reduction commitments.

“Doha successfully concluded the previous round of climate negotiations, paving the way to a comprehensive, legally binding agreement by 2015,” said a statement issued by Mr. Ban's spokesperson.

“The Secretary-General believes that far more needs to be done and he calls on governments, along with businesses, civil society and citizens, to accelerate action on the ground so that the global temperature rise can be limited to 2 degrees Celsius,” it added.

Recent UN-led reports have pointed to the urgency of keeping global average temperatures from rising beyond an internationally agreed level of 2 degrees Celsius, beyond which climate change would have serious impacts.

Earlier this week, Mr. Ban had expressed his hope for five key “deliverables” by governments in Doha, beginning with the adoption of a ratifiable second commitment period of the Protocol.

He also expected progress on long-term climate finance, and ensuring that the institutions set up during previous conferences in Cancun and Durban to support mitigation and adaptation by developing countries – including the Green Climate Fund and the Climate Technology Centre and Network – are fully equipped and effective.

In addition, the Secretary-General expected governments to demonstrate, with no ambiguity, that negotiations on a global and legally binding instrument remain on track, and to show how they intend to act on the gap between mitigation pledges and what is required to achieve the 2 degrees target.

Today's statement said that Mr. Ban will increase his personal involvement in efforts “to raise ambition, scale-up climate financing, and engage world leaders as we now move towards the global agreement in 2015.” 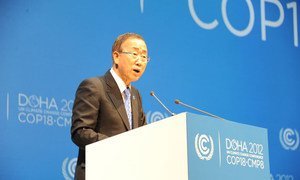