UNOCHA/Charles Lim
People of Cateel in the Philippines start to clean up debris after Typhoon Bopha devastated the town.
6 December 2012

Secretary-General Ban Ki-moon today voiced his sadness at the loss of life and the serious damage to homes and infrastructure in the Philippines as a result of Typhoon Bopha, and said the United Nations stood ready to assist, according to his spokesperson.

The typhoon, known locally as Typhoon Pablo, made landfall in the southern Philippines on Tuesday and is the second devastating storm to hit the island of Mindanao in a year.

With 193-kilometre-per-hour winds, the storm swept across the island, reportedly killing nearly 400 people and leaving at least as many missing. Tens of thousands of people were also reportedly from their homes by Bopha, which triggered floods and landslides.

“The Secretary-General extends his sincere condolences to the Government and people of the Philippines, particularly those who have lost family members and who have been otherwise affected by this disaster,” Mr. Ban’s spokesperson added in a statement.

“The United Nations stands ready to provide humanitarian assistance and to mobilize international support for the response,” he added.

Mindanao and neighbouring areas were hit last December by Tropical Storm Washi, known locally as Sendong, which brought torrential rains that triggered flash floods and landslides. The storm claimed 1,430 lives, damaged nearly 48,000 houses and affected the livelihoods of as many as 625,000 people. 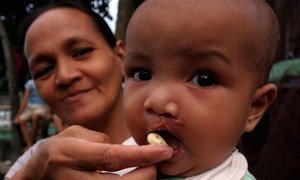 The United Nations and humanitarian partners today revised upwards an appeal for funding to continue relief work for six months among the more than 300,000 people in the Philippines island of Mindanao who were affected by last year’s tropical storm Washi.