FAO/Jon Spaull
A scientist at a greenhouse of the Indian Agricultural Research Institute, New Delhi, doing research on a particular variety of wheat.

6 December 2012
A new United Nations report calls for greater investments in agriculture, stressing that it is one of the most effective ways to reduce hunger and poverty while safeguarding the environment, and for creating more favourable investment climates for farmers.

‘The State of Food and Agriculture 2012,’ the annual flagship report of the UN Food and Agriculture Organization (FAO), says that the world’s more than one billion farmers must be central to any agricultural investment strategy, given that they are the biggest investors in this sector.

“A new investment strategy is needed that puts agricultural producers at its centre,” said FAO’s Director-General, José Graziano da Silva, in a news release on the report.

“The challenge is to focus the investments in areas where they can make a difference,” he added. “This is important to guarantee that investments will result in high economic and social returns and environmental sustainability.”

New data compiled for the report, which was presented today in Rome, show that farmers in low- and middle-income countries invest more than $170 billion a year in their farms – about $150 per farmer.

This is three times as much as all other sources of investment combined, four times more than contributions by the public sector, and more than 50 times more than official development assistance to these countries, FAO noted.

The report states that investing in agriculture is clearly paying off. Over the last 20 years, for example, the countries with the highest rates of on-farm investment have made the most progress in halving hunger, to meet the first of the anti-poverty targets known as the Millennium Development Goals (MDG).

The eight MDGs – which range from halting the spread of HIV/AIDS to providing universal primary education, all by the target date of 2015 – form a blueprint agreed to by world leaders and institutions at a UN summit in 2000. The first MDG aims to eradicate extreme hunger and poverty with a target of halving, between 1990 and 2015, the proportion of people whose income is less than $1 a day

The regions where hunger and extreme poverty are most widespread – South Asia and sub-Saharan Africa – have seen stagnant or declining rates of agricultural investment over three decades.

“Recent evidence shows signs of improvement, but eradicating hunger in these and other regions, and achieving this sustainably, will require substantial increases in the level of farm investment in agriculture and dramatic improvements in both the level and quality of government investment in the sector,” the report said.

It cites a number of factors that reduce the incentive for farmers to invest, including poor governance, absence of rule of law, high levels of corruption, and insecure property rights.

Smallholders face specific, severe constraints, often including extreme poverty, weak property rights, and poor access to markets and financial services. The report recommends focusing on a number of areas to foster smallholder investment, including helping smallholders mobilize their own savings and gain improved access to credit.

Noting that national governments are the second largest source of investment in agriculture, the report urges governments and donors to channel their limited public funds into areas that have been proven to be strongly supportive of agricultural growth and poverty reduction, such as agricultural research and development, rural infrastructure and education.

Evidence from many countries shows that investing in these areas often “has much higher returns than spending on subsidies for agricultural inputs such as fertilizer,” stated FAO, adding that while such subsidies may be politically popular, they usually do not offer the highest returns.

The report also calls on governments, international organizations, civil society and corporate investors to ensure that large-scale investments in agriculture, like the acquisition of land by private companies and funds, are transparent, accountable, socially beneficial and environmentally sustainable.

“The key word is good governance. We need to assure that the investments meet a certain set of conditions that assure that they contribute to food security and sustainable local development,” said Mr. Graziano da Silva. 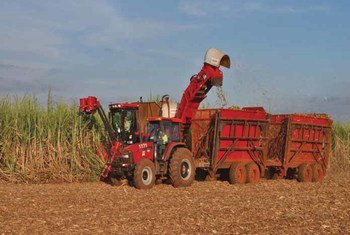 13 November 2012
International investments must give local farmers and active role and leave them in control of their land if they are to have a positive effect on the host country’s economy and advance development, according to a report released today by the United Nations food agency.