Traditional ceramics from Romania, Bedouin chanted poetry from Oman, and a Venezuelan ‘devil dance’ are some of the latest items added to a United Nations-endorsed list of the world’s tangible cultural heritage – part of the world body’s ongoing efforts to preserve endangered practices from fading into extinction.

Traditional ceramics from Romania, Bedouin chanted poetry from Oman, and a Venezuelan ‘devil dance’ are some of the latest items added to a United Nations-endorsed list of the world’s tangible cultural heritage – part of the world body’s ongoing efforts to protecting and promote oral traditions, performing arts, social practices, craftsmanship and knowledge of nature.

Seven traditions in total were inscribed today on the UN Educational, Scientific and Cultural Organization (UNESCO) List of Intangible Cultural Heritage, after being chosen by a committee that is meeting at UNESCO headquarters in Paris this week.

To be inscribed by the committee, elements must comply with a series of criteria, including contributing to spreading the knowledge of intangible cultural heritage and promoting awareness of its importance.

Six of the new inscriptions come from Oman, Romania, Spain, Turkey, Venezuela and Viet Nam, while the traditional activity of falconry was extended to include Austria and Hungary, which join Saudi Arabia, Belgium, the United Arab Emirates, Spain, France, Morocco, Mongolia, Qatar, Syria, the Republic of Korea and the Czech Republic.

The Romanian Horezu ceramics were selected for the work involved in extracting the earth and transforming it into a clay body to produce red pottery with a special finger technique. The potters rely on traditional tools: mixers, potter’s wheels, combs, tools for decoration and wood-burning stoves.

In Oman, the tradition Bedouin chanted poetry sung by groups of men travelling on camelback through the desert also made the list, as it is considered part of an oral tradition used to transmit messages from one group of travellers to another. They poems are also sung at weddings, camel races and other festivities.

The Fiesta de Patios in Cordova, Spain, in which people host traditional singing, dancing, is also a new inscription, as well as the Mesir Macunu festival in Turkey, which commemorated the recovery of the mother of Suleiman the magnificent from a disease and draws thousands of people every year.

Venezuelan dancers masked as devils during the Feast of Corpus Christi were incorporated to the list as they are considered part of a tradition that transmits historical memory among communities. During Corpus Christi, the ‘devils’ dance backwards in penitence and eventually surrender to the Sacrament symbolizing the triumph of good over evil.

The Worship of Hùng kings in Phú Tho, Viet Nam, in which pilgrims converge every year to commemorate their ancestors and pray for good weather and good harvests was also recognized as communities make delicacies, enact verbal and folks art performances, and compete to provide high valued objects of worship.

The Mesir Macunu festival of Manisa, Turkey, commemorates the recovery of the mother of Suleiman the Magnificent from a disease cured by a paste known as ‘mesir macunu.’ Every March, the paste is prepared, wrapped, blessed and scattered from the domes of the Sultan Mosque. Thousands of people come from different regions of Turkey to compete to catch the pieces as they fall – the belief is that by so doing their wishes for marriage, work and children will come true within the year.

♦ Receive daily updates directly in your inbox - Subscribe here to a topic.
♦ Download the UN News app for your iOS or Android devices.
heritage|UNESCO 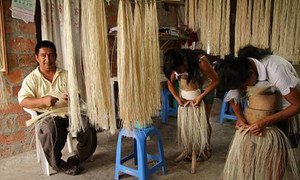