1 December 2012
The United Nations Security Council welcomes the continued cooperation of the Governments of Iraq and Kuwait, the 15-member said today in a press statement today.

In addition, it welcomed “Iraq's continued commitment to full implementation of its outstanding obligations under the relevant Chapter VII Security Council resolutions, and called on both States to continue to act in a spirit that builds further confidence and cooperation, which should contribute to the strengthening of their good-neighbourly relations and enhancing regional stability.”

Relations between the two countries were affected by Iraq's 1990 invasion of Kuwait. The following year, the Security Council established the UN Compensation Commission (UNCC), which settles the damage claims of those who suffered losses in the invasion.

So far, the amount of compensation disbursed by the UNCC totals $37.7 billion for more than 1.5 million successful claims of individuals, corporations, Governments and international organizations. Successful claims are paid with funds drawn from the UN Compensation Fund, which is funded by a percentage of the proceeds generated by the export sales of Iraqi petroleum and petroleum products.

In their press statement, the Council members also reaffirmed the importance of Iraq achieving international standing equal to that which it held prior to the adoption of resolutions pertaining specifically to it, beginning with resolution 661, adopted in 1990 and which dealt with international sanctions on Iraq under Chapter VII of the UN Charter, and taking into account Iraq's remaining obligations as identified in a report of Secretary-General Ban Ki-moon in relation to part of resolution 1859.

Adopted in 2008, the Council's resolution 1859 dealt with the proceeds from sales of petroleum, petroleum products and natural gas into the Development Fund for Iraq, in addition to requesting that the Secretary-General, after consultations with Iraq, report on facts relevant to consideration by the Council of actions necessary for the Middle Eastern country to achieve an international standing equal to that it had enjoyed prior to the adoption of such resolutions.

Chapter VII of the UN Charter allows the Council to use force in the face of a threat to peace or aggression, taking “such action by air, sea, or land forces as may be necessary to maintain or restore international peace and security,” including blockades and other operations by the forces of Member States.

“The members of the Security Council recognised Kuwait's cooperation to support the Iraq-Kuwait Boundary Maintenance Project and called on Iraq to complete the field maintenance work in a timely manner,” the statement added.

Briefing the Council on Thursday, the Secretary-General's Special Representative and head of the UN Assistance Mission for Iraq (UNAMI), Martin Kobler, said that progress in relations between Iraq and Kuwait will “depend on the restoration of confidence between both sides” and encouraged further momentum from the two countries. 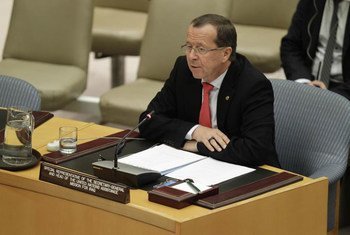 29 November 2012
Highlighting improvements in relations between Iraq and Kuwait, the United Nations top official in Iraq today said that progress will “depend on the restoration of confidence between both sides” and encouraged further momentum from the two countries.