United Nations officials are marking World AIDS Day with a call for building on recent successes and pressing ahead to get to zero – zero new HIV infections, zero discrimination and zero AIDS-related deaths – by 2015.

“On this World AIDS Day, let us commit to build on and amplify the encouraging successes of recent years to consign HIV/AIDS to the pages of history,” Secretary-General Ban Ki-moon said in his message for the Day, observed annually on 1 December.

The World AIDS Day Report for 2012, he noted, reveals significant progress in preventing and treating HIV/AIDS in the past two years. The number of people accessing life-saving treatment rose by 60 per cent and new infections have fallen by half in 25 countries – 13 of them in sub-Saharan Africa.

In addition, AIDS-related deaths have dropped by a quarter since 2005, according to the report, published by the Joint UN Programme on HIV/AIDS (UNAIDS).

“We have moved from despair to hope. Far fewer people are dying from AIDS,” said the Executive Director of UNAIDS, Michel Sidibé. “Twenty-five countries have reduced new infections by more than 50 per cent. I want these results in every country.

“The pace of progress is quickening. It is unprecedented – what used to take a decade is now being achieved in just 24 months. Now that we know rapid and massive scale up of HIV programmes is possible, we need to do more,” he said in his message for the Day.

The Director-General of the UN Educational, Scientific and Cultural Organization (UNESCO), Irina Bokova, noted that progress must strengthen the determination to create a world free of AIDS. “HIV and AIDS can be conquered through renewed commitment and sustained solidarity. For this, we need to use every resource as best we can and draw on all available evidence,” she said.

The agency works for the 'triple zero' goal by supporting countries to improve HIV and age-appropriate sexuality education for young people, as well as tackling gender inequalities since women and girls are severely affected by HIV and bear the greatest burden of care.

Young people aged 15-24 are the group most affected by HIV, accounting for 40 per cent of all new adult HIV infections, according to UNAIDS. In 2011, about five million young people were living with HIV worldwide, with more than 2,400 being newly infected every day.

UNAIDS said it has harnessed the energy and creativity of youth and the fashion world in support of the global HIV response, with 11 young designers having joined together to create an exclusive collection of tops and t-shirts for Italian fashion retailer OVS.

In her message for the Day, the Executive Director of the UN Entity for Gender Equality and the Empowerment of Women (UN Women), Michelle Bachelet, welcomed the decline in new infections and AIDS-related deaths, but called for that success to be built on so that all women get the information, services and support they need to stay healthy throughout their lifetimes.

“This World Aids Day, as we celebrate progress in the fight against AIDS, let us renew efforts to protect women’s rights, including reproductive rights and the right to live free of violence and discrimination,” Ms. Bachelet said. “Action to advance gender equality and women’s empowerment brings us closer to zero new infections, zero discrimination and zero AIDS-related deaths. Together, we can get to zero.”

The UN Children's Fund (UNICEF) is marking the Day with a call to ensure that more pregnant women and children living with HIV receive the treatment they need – which is vital for reaching the goal of an AIDS-free generation.

As of December 2011, over 100,000 more children were receiving antiretroviral treatment (ART) compared to 2010, the agency stated. But less than one-third of children and pregnant women are receiving the treatment they need, as opposed to the global average of 54 per cent for adults overall.

“We must do still more to help mothers and children who live with HIV be able to live free from AIDS. We must rededicate ourselves to boosting the number of pregnant women and children being tested and treated through basic antenatal and child health programmes,” said UNICEF's Executive Director, Anthony Lake.

Good nutrition is vital for the health and survival of all people, but it is particularly important for people with HIV and AIDS, the Executive Director of the UN World Food Programme (WFP), Ertharin Cousin, said in her message marking the Day.

“Food assistance not only increases the effectiveness of ART but also helps ensure greater adherence to treatment regimens, as people living with HIV are no longer forced to choose between treatment or food,” she added.

Ms. Cousin noted that, in the poorest communities, WFP's food and nutrition support to people living with HIV and their families, including pregnant women and new mothers, helps improve access to treatment and increase treatment success – which means saving more lives and seeing fewer infections. 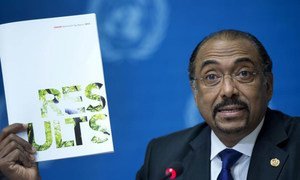