UNHCR/S.Murray-Jones
Vulnerable Afghan families line up to receive winter supplies in Dahsabz, a suburb of Kabul.

30 November 2012
The United Nations refugee agency has begun distributing winter aid to some 40,000 families which are at risk in the cold weather in remote areas of Afghanistan, as well as the capital, Kabul.

“Winter temperatures in Afghanistan can fall to around -26°C and for this reason it is important that people are protected from the cold,” a spokesperson for the UN High Commissioner for Refugees (UNHCR), Melissa Fleming, told a news conference in Geneva.

The agency has primary responsibility for delivering winter assistance to returnees and vulnerable displaced people in rural areas of Afghanistan – a joint effort coordinated by the Ministry of Refugees and Repatriation, the National Disaster Management Authority and the UN Office for the Coordination of Humanitarian Affairs (OCHA).

Ms. Fleming said that the recipients of the winter aid are recent returnees from Pakistan and Iran, internally displaced persons (IDPs) – including people displaced by conflict – and others at risk in the cold weather.

“The relief items going out around the country include tents, blankets, plastic sheets, fuel, sleeping mats, lanterns, jerry cans, kitchen sets, soap and warm clothes,” she stated. “This year, 30,000 of those who will receive winter assistance will be people living in Kabul’s informal settlements.”

“Returned refugees and internally displaced people often live in extremely bad conditions in isolated communities – communities rarely seen by the general public and where access is very difficult. Those receiving our aid include really destitute returnees and IDP groups, families headed by women, or elderly or disabled, and children,” Ms. Fleming said.

During a visit to the country this week, OCHA’s Director of Operations, John Ging, called on the international community to step up its humanitarian support for Afghanistan so it can sustain the progress made so far.

“It is clear that the Government is making progress; the candid and professional approach being taken is certainly impressive, but given the scale of the challenge, international funding support will also be key to success,” he stated. 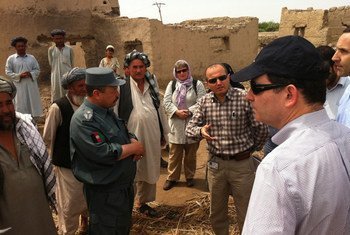 29 November 2012
A senior United Nations official today called on the international community to step up its humanitarian support for Afghanistan to sustain the progress made so far in the country where thousands have suffered through 34 years of conflict and poverty.