30 November 2012
The United Nations human rights chief today expressed alarm at the current unrest in the Tunisian town of Siliana, and urged the Government to stop using excessive force against demonstrators, while also calling on the population to avoid resorting to violence.

“The High Commissioner condemns the excessive and disproportionate use of force by members of the security forces against the protesters whose demonstration was announced in advance. In particular, she is urging the authorities to immediately halt the use of shotguns against protesters,” Rupert Colville, the spokesperson for UN High Commissioner for Human Rights, Navi Pillay, told reporters in Geneva.

“The rights to freedom of expression and opinion, and peaceful assembly are fundamental human rights which must be protected and respected,” he noted.

On Tuesday, protest over unemployment and imbalances in development broke out, leading to violent confrontations between demonstrators and security forces, according to the Office of the N High Commissioner for Human Rights (OHCHR). More than 220 people are believed to have been injured, and sporadic violence, house-to-house searches and arrests are reported to have taken place in Siliana yesterday.

“Some of the demonstrators suffered serious injuries caused by the use of bird shot, reportedly fired without warning,” Mr. Colville said. “On Thursday, our staff visited victims who had been taken to hospitals in the capital Tunis, and have documented cases of shotgun wounds to the head, back, and face, as well as eye injuries which could in some cases lead to blindness.”

“Some demonstrators are also suffering from broken bones,” he added. “We understand a number of police officers have also been injured and our staff in Tunis will be visiting them in hospital today.”

Mr. Colville stated that the High Commissioner welcomed the Government’s announcement yesterday of an independent Commission of Inquiry to investigate the events and urged them to take appropriate measures to guarantee accountability and prevent such abuses from occurring in future.

“[Ms. Pillay] is also calling on all parties to engage in a positive and constructive dialogue, and urging the Government of Tunisia to take the necessary measures to ensure equitable development that will permit all Tunisians to enjoy their economic and social rights,” Mr. Colville said. “The economy in the Siliana region has been in decline for years, and this appears to be the root cause of the unrest we have seen over the past few days.” 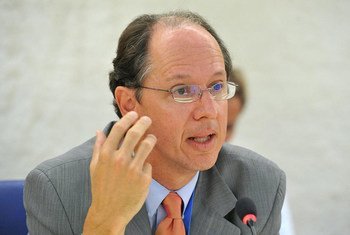 16 November 2012
Noting that the transitional justice process in Tunisia faces some serious challenges, an independent United Nations expert today urged authorities there to put human rights at the centre of their efforts in this area.