The General Assembly today voted to grant Palestine non-member observer State status at the United Nations, while expressing the urgent need for the resumption of negotiations between Israel and the Palestinians leading to a permanent two-State solution.

The resolution on the status of Palestine in the UN was adopted by a vote of 138 in favour to nine against with 41 abstentions by the 193-member Assembly. 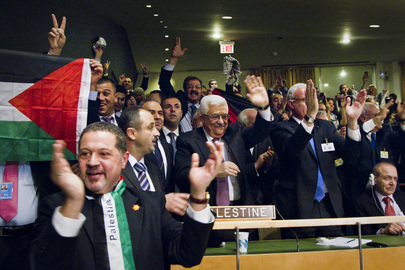 Mahmoud Abbas (centre), President of the Palestinian Authority, with his delegation in the General Assembly. UN Photo/Rick Bajornas

“We did not come here seeking to delegitimize a State established years ago, and that is Israel; rather we came to affirm the legitimacy of the State that must now achieve its independence, and that is Palestine,” the President of the Palestinian Authority, Mahmoud Abbas, told the Assembly before the vote.

Mr. Abbas noted that the world was being asked today to undertake a significant step in the process of rectifying the “unprecedented historical injustice” inflicted on the Palestinian people since 1948.

“Your support for our endeavour today,” he said, “will send a promising message – to millions of Palestinians on the land of Palestine, in the refugee camps both in the homeland and the Diaspora, and to the prisoners struggling for freedom in Israel’s prisons – that justice is possible and that there is a reason to be hopeful and that the peoples of the world do not accept the continuation of the occupation.” 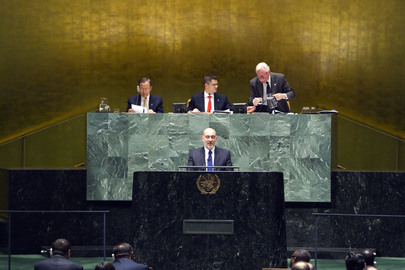 Israel’s Ambassador to the UN, Ron Prosor, said his delegation could not accept today’s resolution. “Because this resolution is so one-sided, it doesn’t advance peace, it pushes it backwards,” he stated, adding that peace could only be achieved through negotiations.

“There’s only one route to Palestinian statehood and that route does not run through this chamber in New York. That route runs through direct negotiations between Jerusalem and Ramallah that will lead to a secure and lasting peace between Israelis and Palestinians,” he added. “There are no shortcuts. No quick fixes. No instant solutions.” 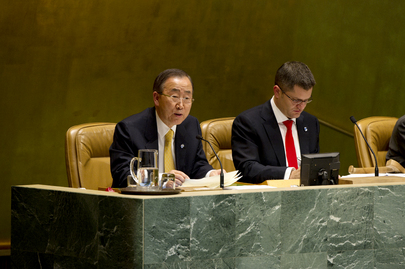 “Today’s vote underscores the urgency of a resumption of meaningful negotiations,” Secretary-General Ban Ki-moon said after the vote was finalized. “We must give new impetus to our collective efforts to ensure that an independent, sovereign, democratic, contiguous and viable State of Palestine lives side by side with a secure State of Israel. I urge the parties to renew their commitment to a negotiated peace.”

Addressing the same gathering, the President of the General Assembly, Vuk Jeremic, appealed to “my dear friends from Palestine and Israel” to work for peace, to negotiate in good faith, and ultimately, to succeed in reaching the historical settlement.

“I have no doubt that history will judge this day to have been fraught with significance – but whether it will come to be looked upon as a step in the right direction on the road to peace will depend on how we bear ourselves in its wake,” he said. “Let us therefore have the wisdom to act in furtherance of the goal I’m sure we all share.”

In the resolution, the Assembly also voiced the hope that the Security Council will “consider favourably” the application submitted in September 2011 by Palestine for full UN membership.

The Palestinian bid for full UN membership stalled last year when the 15-nation Council, which decides whether or not to recommend admission by the Assembly, said it had been “unable to make a unanimous recommendation.”

Today’s action comes on the same day that the UN observed the annual International Day of Solidarity with the Palestinian People. Established in 1977, the Day marks the date in 1947 when the Assembly adopted a resolution partitioning then-mandated Palestine into two States, one Jewish and one Arab. 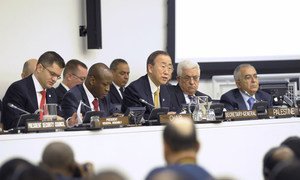 United Nations Secretary General Ban Ki-moon today called on Israel and the Palestinians to find the “political will and courage” to move ahead with talks aimed at establishing a lasting peace between them through Palestinian statehood and security for Israel.