The United Nations peacekeeping chief today warned that the lack of progress on outstanding issues between Sudan and South Sudan is having a negative impact on the stability of the latter, putting at risk the progress made since it gained independence from the former in 2011.

“Lack of progress in resolving the outstanding security, economic and political issues between the two countries continued to directly impact stability and security inside the country, at the expense of efforts and investments towards peacebuilding and state-building activities and the delivery of essential service delivery to its citizens,” Under-Secretary-General for Peacekeeping Operations Hervé Ladsous told the Security Council.

Mr. Ladsous, who presented the Secretary-General’s latest report on South Sudan, stressed that tensions between the two States have subsided since they signed the 27 September Cooperation Agreements, which created a roadmap to facilitate post-secession relations. However, the slow implementation of these pacts could adversely impact economic and social stability in South Sudan, particularly if the export of oil is delayed.

“Given the dependency of South Sudan on oil revenues, further delay in generating them would not only continue to negatively affect all Government development programmes but could also lead to tensions within its different components, including security services,” he said.

While the country has remained stable for the past four months, the situation in the state of Jonglei is still challenging, Mr. Ladsous told the 15-member body.

In December last year, inter-communal violence in the state between the Lou Nuer and Murle groups led to nearly 900 deaths, incidents of abductions of women and children, the destruction of homes and the displacement of thousands of civilians. Violence resurged this August, as a renegade group of armed youth killed 24 members of the South Sudanese army and displaced more civilians.

Mr. Ladsous said progress towards inter-communal reconciliation has been slow, and urged a comprehensive and inclusive political process led by the Government to address the core grievance of constituencies.

He added that the UN Mission in South Sudan (UNMISS) has reinforced its presence in the state and remains in constant touch with the Government to counter violent activities and prevent abuses against civilians.

Efforts to support capacity-building for South Sudan police forces are also critical, Mr. Ladsous said. “However, progress in this area requires key complementary legal and administrative reforms and significant resources which have been lacking so far,” he said, adding that the country will require sustained attention and investment to successfully build its infrastructure and resources in this regard. 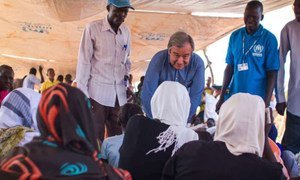 A senior United Nations official today highlighted the need to assist some 60,000 displaced persons living in South Sudan’s largest refugee camp close to the border with Sudan, describing their situation as a forgotten crisis.