23 November 2012
The United Nations Food and Agriculture Organization (FAO) has stressed that investments are crucial to help rehabilitate Haiti’s agricultural sector in the wake of various natural disasters this year that caused colossal damage to the farming and fishing industries.

Speaking at a joint press conference with Haitian President Michel Martelly at FAO Headquarters in Rome yesterday, Mr. Graziano da Silva pledged to support Haiti through interventions that address the country’s immediate crisis situations as well as the root causes of its food insecurity and poverty.

FAO and the Haitian Government are currently seeking $74 million over the next 12 months to help long-term resilience in the country. The funds would be used to rehabilitate irrigation schemes and rural access roads; restore local seed production; provide seeds, fertilizer and agricultural tools to small farmers; support inland fisheries; and vaccinate livestock, among other activities.

The funds would also go towards helping farmers plant crops for the next planting season which starts in December.

Mr. Graziano da Silva said the objective is “to make Haitians, especially farmers, more resilient to climate and other challenges.”

It was the third disaster to hit Haiti in the space of a few months. Between May and June, a severe drought struck at the beginning of the critical spring cropping season, and in August, Tropical Storm Isaac battered the country, displacing thousands of people. Together, the three disasters left two million Haitians at risk of food insecurity and resulted in losses of $254 million to the agricultural sector.

“If we don’t intervene quickly, over 60 per cent of the population deriving their livelihood from agriculture will be put at risk,” said FAO Assistant Director-General for Technical Cooperation Laurent Thomas.

Out of the $74 million sought, FAO has so far secured $2.7 million, with indications of a further $5 million-$6 million from different donors. The agency will also implement short- and medium-term projects in response to the current crisis, ranging from immediate relief activities to interventions that have a longer-term economic and environmental impact. 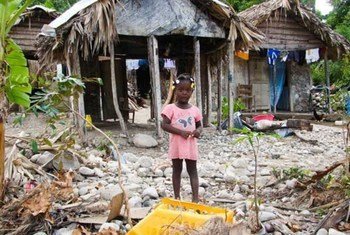 13 November 2012
The United Nations food relief agency today warned that more than 1.5 million Haitians could remain at risk of food insecurity well into 2013 if they do not receive adequate assistance to recover from a series of natural disasters that have hit the country over the past six months, including a drought, Tropical Storm Isaac and Hurricane Sandy.