23 November 2012
United Nations agencies have begun delivering winter packages containing items such as blankets, thermal clothing and hygiene kits for thousands of Syrian families across the country and in neighbouring nations as temperatures begin to drop.

Inside Syria, the Office of the UN High Commissioner for Refugees (UNHCR) has now delivered vital aid packages to some 60,300 families, benefiting more than 300,000 people, spokesperson Adrian Edwards told reporters in Geneva. “The goal is to provide such assistance to 500,000 people – or 100,000 families – by the end of this year.”

Each UNHCR family aid package weighs 42 kilograms and contains blankets, kitchen sets, jerry cans and hygiene materials. Deliveries so far this month have been made to the cities of Hassakeh, Aleppo, Homs, and in and around Damascus, the capital, Mr. Edwards said.

Syria has been wracked by violence, with at least 20,000 people, mostly civilians, killed since the uprising against President Bashar al-Assad began over 20 months ago. The violence has spawned more than 440,000 refugees, while more than 4 million people are in need of humanitarian assistance, according to UN estimates.

“Temperatures are falling fast, down to 5 degrees Celsius this week with expected lows around freezing point,” said the agency’s Deputy Representative in Syria, Ettie Higgins. “We urgently need to get clothing and other essential items to the most vulnerable children, no matter where they are.”

UNICEF is particularly concerned about the impact winter will have on children’s health, including increased risk of respiratory conditions. Many of them fled their homes with only summer clothing and are already fragile from the ongoing stress associated with displacement and conflict.

Health supplies that will benefit more than 225,000 children for the next three months are also on their way from UNICEF’s warehouse in Copenhagen, Denmark, the agency said in a news release. These include half a million school bags, each containing stationery supplies. Further supplies are being sourced within Syria where possible.

“Sourcing supplies from around the world and getting them into Syria is only half the solution,” said Ms. Higgins, adding that UNICEF urgently needs an additional $79 million to support its emergency response in Syria and the four surrounding countries – Iraq, Jordan, Lebanon and Turkey.

“We face enormous challenges on the ground because of the security situation, but with our network of dedicated partners we will do everything we can to ensure that children get the warm clothes and blankets that they urgently need.”

UNHCR had previously warned that delivering aid throughout Syria has become increasingly hazardous, and Mr. Edwards noted that there had already been a number of security incidents, including the hijacking of three trucks during the last week of October, which were carrying some 1,500 mattresses, and a fire in an Aleppo warehouse reportedly caused by shelling that resulted in the loss of tens of thousands of aid items.

Both agencies are delivering supplies to Syrian refugees in neighbouring countries. In Lebanon, UNICEF plans to reach more than 24,000 children with clothing kits and clothing vouchers. In Jordan, 78 heated winter tents for use as child friendly spaces and classrooms will be set up over the next month. Solar panels are also being installed at refugee washing centres in both Jordan and Iraq to provide hot water. 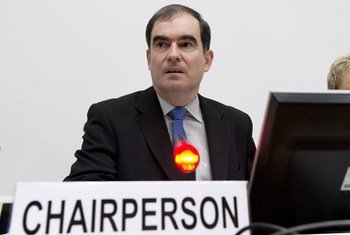 9 November 2012
With no end in sight for the conflict in Syria, United Nations officials today warned that over four million people may be in need of humanitarian relief by the start of next year and appealed for urgent funds for aid operations, particularly as temperatures begin to drop in the region.