20 November 2012
Deputy Secretary-General Jan Eliasson today stressed the importance of global efforts to cut off funding for terrorism while upholding United Nations values, including respect for human rights and the rule of law.

“If they are prevented from getting funds, their capacity to carry out attacks is severely curtailed,” Mr. Eliasson said, as he delivered remarks on behalf of Secretary-General Ban Ki-moon to a special meeting of the Security Council’s Counter-Terrorism Committee (CTC).

Mr. Eliasson noted that terrorist operations need funding not just to buy weapons and materials to make horrific explosive devices. “They need it to support their networks; to recruit personnel; to travel and communicate with each other; and to conduct training and reconnaissance,” he said.

The meeting, held at UN Headquarters in New York, is designed to assess current trends and challenges in countering terrorist financing and the need for a global approach.

The prevention and suppression of financing terrorism is one of the core requirements of resolution 1373, which the Council adopted in the wake of the 11 September 2001 terrorist attacks in the United States. The resolution called for all countries to criminalize terrorism, to deny terrorists access to financial resources, and to prevent terrorists from crossing borders, among other measures. It also set up the CTC, which is made up of Council members and tasked with monitoring and analyzing the information provided on counter-terrorism efforts by Member States.

Participants at the Council meeting are also discussing the revised standards of the Financial Action Task Force (FATF) and their implications for preventing funding of terrorism.

The inter-governmental FATF has developed a series of recommendations that are recognized as the international standard for combating of money laundering and the financing of terrorism and proliferation of weapons of mass destruction.

“The Task Force has promoted policies and mechanisms that have greatly enhanced our ability to prevent funding of terrorism,” said Mr. Eliasson. “I therefore welcome the work that has recently been completed in FATF to revise those standards in light of more than a decade’s experience, in order to sharpen them and make them even more useful to Member States.”

He added that the UN has increasingly become engaged in global efforts to develop strategies and programmes aimed at cutting off funding for terrorism while upholding the Organization’s values and norms.

“As in other areas of counter-terrorism, when adopting and implementing measures against terrorist financing, we need to bear in mind the importance of respecting human rights and the rule of law,” he stated.

“This is necessary not only to preserve our moral authority,” he continued, “but also to avoid fuelling grievances which terrorists exploit to justify their unjustifiable actions, to gain safe haven in different communities and to recruit new affiliates.” 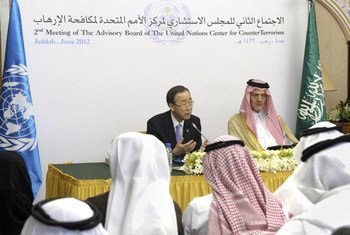