The Global Fund/Didier Ruef
With a grant, The Global Fund to Fight AIDS, Tuberculosis and Malaria, through the Eritrean Ministry of Health, supports a programme to teach women about HIV and AIDS.

15 November 2012
In a bid to ensure the global fight against three of the world’s most devastating diseases remains efficient, the Board of the United Nations-backed Global Fund to Fight AIDS, Tuberculosis and Malaria voted today to begin an immediate transition to a new investing formula.

In place of an annual “rounds-based” system that saw countries submit their proposals during a set funding period, the Fund says that additional money will now be invested in health programs that are “poised to achieve the quickest impact.”

“The Global Fund has taken a big step forward in implementing the new funding model,” said the Board’s Chair, Simon Bland, according to a release from the Fund, which is the world’s main financier of programmes to fight AIDS, tuberculosis and malaria.

“This new funding model will make our grants even more effective and capable of achieving real impact,” he added.

One important change will be more flexible timing for grant applications, the Fund said. Instead of having to apply at one set time, implementers “will be able to better align the submission of grant proposals with their own national planning cycles.”

Created in 2002 to scale up resources to treat HIV, AIDS, TB and malaria, the Global Fund is a public-private partnership and international financing institution that has already approved funding of $22.9 billion for more than 1,000 programs in 151 countries. It has also helped various aid programmes provide AIDS treatment for 3.6 million people, anti-tuberculosis treatment for 9.3 million people and 270 million insecticide-treated nets for the prevention of malaria.

“A new funding model is designed to significantly improve the way the Global Fund invests in health programs, with a process that is more predictable and reliable, and also more flexible, so that it can achieve a higher success rate in all grants and more effectively save the lives of people affected by the three diseases,” according to the Fund.

A need for change emerged in the wake of the 2008 global financial crisis, the Fund said, noting that “the international financial crisis accelerated concerns that the Global Fund needed to invest for impact, and move away from a relatively passive role in shaping demand.”

“The Board,” it added, “decided to make changes to ensure that it directs the organization’s investments toward those people most in need, and toward those interventions that can help the most people.”

The Fund said that the former rounds-based system had been “highly successful” in the years following the Fund’s creation, crediting it with “spurring partnerships across sectors in many countries to identify and quantify their own needs in preventing and treating AIDS, TB and malaria.”

Under the new funding approach, special consideration will be given to countries applying with programmes that are, among other things, underfunded over the 2013-2014 period, or at risk of service interruptions, the Fund said. There will also be a focus on programmes that are “in a position to achieve rapid impact.”

“The new funding model will change the way implementers apply for financing, get approval of their proposals and then manage their grants,” the Fund said. “Once fully developed, it will encourage the development of robust national strategic plans in each country, and strive for more simplicity and efficiency.”

“Mark inspires confidence,” Mr. Sidibé said. “I fully trust that he will lead the Global Fund to new heights by strengthening partnerships and delivering results on the ground. His appointment marks a new era for the Global Fund and UNAIDS is looking forward to a strong and dynamic collaboration in the coming years.”

According to UNAIDS, Dr. Dybul served as the United States Global AIDS Coordinator, leading the implementation of the President's Emergency Plan for AIDS Relief during the presidency of George W. Bush. He currently serves as Co-Director of the Global Health Law Programme at Georgetown's O'Neill Institute for National and Global Health Law, and Senior Advisor to the President at Georgetown University. 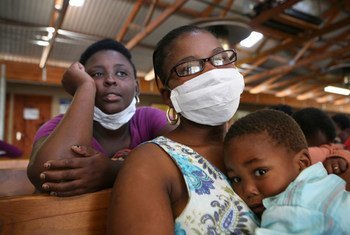 17 October 2012
Despite progress in the global fight against tuberculosis (TB), the gains so far remain fragile and more needs to be done to eliminate the disease, the UN health agency said today, as it launched a report reviewing anti-TB efforts.