14 November 2012
A United Nations independent expert today voiced serious concerns about reported intimidation and attacks against judges and judicial officers in Sri Lanka, and warned that they might form part of a pattern of attacks, threats, reprisals and interference in the independence of the justice system in the Asian country.

“I urge the Sri Lanka Government to take immediate and adequate measures to ensure the physical and mental integrity of members of the judiciary and to allow them to perform their professional duties without any restrictions, improper influences, pressures, threats or interferences, in line with the country’s international human rights obligations,” the UN Special Rapporteur on the independence of judges and lawyers, Gabriela Knaul, said in a news release.

According to reports she has received, most cases of attacks and interference against the judiciary in Sri Lanka are not genuinely investigated, and perpetrators are not held to account.

“The irremovability of judges is one of the main pillars guaranteeing the independence of the judiciary and only in exceptional circumstances may this principle be transgressed,” Ms. Knaul said, while also expressing her uneasiness with the procedure of impeachment of the Chief Justice of the country’s Supreme Court, Dr. Bandaranayake, launched before the Parliament on 1 November.

“Judges may be dismissed only on serious grounds of misconduct or incompetence, after a procedure that complies with due process and fair trial guarantees and that also provides for an independent review of the decision,” she said. “The misuse of disciplinary proceedings as a reprisals mechanism against independent judges is unacceptable.”

In the Special Rapporteur’s view, according to the news release from the Office of the UN High Commissioner for Human Rights (OHCHR), the procedure for the removal of judges of Sri Lanka’s Supreme Court, set out in article 107 of the country’s constitution, allows the Parliament to exercise considerable control over the judiciary – and is therefore incompatible with both the principle of separation of power and article 14 of the International Covenant on Civil and Political Rights.

“I urge the authorities to reconsider the impeachment of Chief Justice Bandaranayake and ensure that any disciplinary procedure that she might have to undergo is in full compliance with the fundamental principles of due process and fair trial,” the Special Rapporteur added.

Independent experts, or special rapporteurs like Ms. Knaul, are appointed by the Geneva-based UN Human Rights Council to examine and report back, in an unpaid capacity, on specific human rights themes. 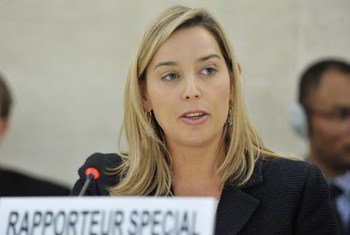