12 November 2012
The United Nations and the broader international community will remain engaged in Timor-Leste beyond December, when the world body’s peacekeeping mission withdraws from the country, a top UN official told the Security Council today.

“Timor-Leste still faces many challenges. However, a peacekeeping mission is no longer best placed to support efforts to meet those challenges,” said the Acting Special Representative of the Secretary-General and head of the UN Integrated Mission in Timor-Leste (UNMIT), Finn Reske-Nielsen.

“The time has come for Timor-Leste’s interaction with the international community to be guided through different structures and modalities,” he added in his briefing to the 15-member body.

Mr. Reske-Nielsen reported that UNMIT is on track to withdraw by 31 December and that the phased drawdown of the mission has been moving apace.

Earlier this year, the Council extended the mandate of UNMIT – which it first established in 2006 in the wake of a major political, humanitarian and security crisis that erupted that year – for a final period, so the Mission could assist the country with several key tasks this year.

This has been an eventful year for the small nation that the UN shepherded to independence in 2002: it celebrated the 10th anniversary of its independence, elected a new president and held parliamentary elections, which were largely peaceful and held in an orderly manner.

A ceremony was held on 31 October to mark the certification of the full reconstitution of the national police, known by the acronym PNTL – acknowledging that the force was fully capable of conducting all police functions throughout the country – a key benchmark ahead of the Mission’s departure.

“The reconstitution of the police service of Timor-Leste is a milestone that marks the great advances of the PNTL and civilian oversight authorities since 2006,” the envoy told the Council. “This is not to say that the PNTL is a perfect police service. Significant capacity challenges remain, and have been identified jointly by the Government and UNMIT.”

He noted that building an effective and responsible police service is an ongoing effort that stretches over many, many years. “As in other areas, Timor-Leste is now at a stage when these long-term efforts can be better served by other forms of international cooperation,” he stated, adding that UN agencies will continue to provide some support to the PNTL post-2012.

At the same time, Mr. Reske-Nielsen urged Member States to continue their strong engagement with the PNTL, including through the ‘Friends of PNTL’ – an important venue to mobilise and coordinate external support. “With the planned departure of UNMIT, their engagement will become even more important,” he stressed.

In terms of UNMIT’s drawdown, the Special Representative said that one of the Mission’s regional offices has already closed, with two to close this month and the last one in early December. In addition, the repatriation of UNMIT police accelerated after the certification ceremony of 31 October, with only a residual presence to remain by the end of November.

The only notable area where UNMIT’s work will not be completed by the end of its mandate concerns the investigations into cases relating to crimes against humanity and other serious crimes committed between 1 January and 25 October 1999.

Under the supervision of the Office of the Prosecutor-General, the UNMIT Serious Crimes Investigation Team has completed 319 of 396 investigations. It is projected that an additional 16 investigations will be concluded by 31 December, leaving 61 investigations outstanding.

Also today, the Council heard a briefing by Ambassador Baso Sangqu of South Africa, who headed the Council’s 3-6 November mission to Timor-Leste. He stressed the South-East Asian country would continue to have the support of the world body once UNMIT departs. 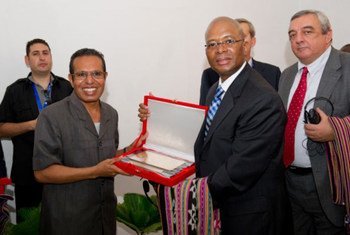 7 November 2012
On an official visit to the Timor-Leste this week, members of the Security Council praised the “historic milestones” achieved by the southeast Asian nation since it restored independence in 2002, and reiterated the support of the United Nations as the country faces new challenges.