The acting head of the joint United Nations-African Union peacekeeping mission in western Sudan’s Darfur region – known by the acronym UNAMID – today called on the Sudanese Government and regional armed movements to accept that continued fighting “is a dead end that only harms the people of Darfur.”

UNAMID’s Acting Joint Special Representative and Joint Chief Mediator, Aïchatou Mindaoudou, issued the call as she highlighted that fighting between the Sudanese Armed Forces (SAF) and an unnamed armed group, on 9 November, near the village of Shangil Tobaya, in North Darfur, was “part of a larger pattern of conflict in the area in recent months.”

In the wake of the 9 November fighting, the peacekeeping mission treated injured combatants at a nearby location before responding to a request to airlift them to El Fasher, the capital city of North Darfur state, for additional care.

The provision of medical assistance to wounded combatants is a core requirement of international humanitarian law, which falls under UNAMID’s mandate, the Mission noted.

“In the past, the Mission has provided such medical assistance to wounded combatants from both sides, with due respect to the principles of neutrality and impartiality,” UNAMID said, adding that the recent escalation in violence is a matter of “grave concern.”

Established in July 2007, UNAMID has the protection of civilians as its core mandate. In addition, the Mission is tasked with other responsibilities, such as facilitating the delivery of humanitarian aid and assisting with an inclusive peace process in Darfur, where fighting broke out nine years ago, pitting Government forces and allied militiamen against rebel groups.

Besides the 9 November fighting, reports arrived last week of an alleged attack on civilians that resulted in fatalities, an abduction of a civilian and widespread population displacement in Sigili, about 40 kilometres southeast of El Fasher. In addition, several UNAMID peacekeepers were killed and wounded amid regional violence in October.

A plan known as the Document for Peace in Darfur (DDPD) provides a comprehensive roadmap for bringing an end to fighting in Darfur, and establishing a lasting peace. Finalized in May 2011 in Doha, Qatar, which has been heavily involved in mediation efforts involving the Sudanese region, the plan has been signed by the Government and one rebel group, while a second rebel group recently agreed to commit to it. 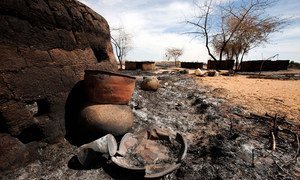 The acting head of the joint United Nations-African Union peacekeeping mission in Darfur, known by the acronym UNAMID, has called on the Government of Sudan to “swiftly” proceed with its investigation into violence which reportedly affected the village of Sigili.